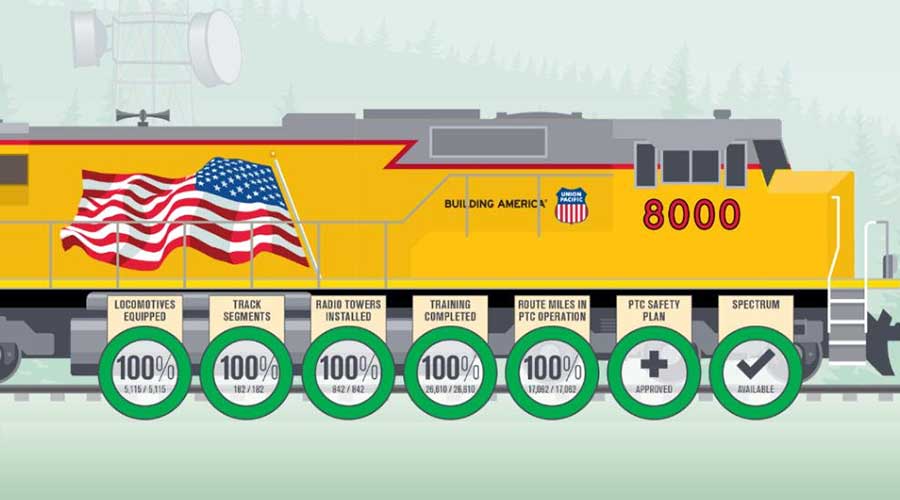 Union Pacific Railroad has completed implementation of positive train control (PTC) on all of its federally mandated rail lines, including passenger train routes, the Class I announced yesterday.

UP will continue working with partner railroads on interoperability to ensure seamless operation onto UP track, company officials said in a press release.

"While Union Pacific began its first PTC operations nearly four years ago, we have now completed our initial implementation and continue supporting other railroads in our mutual efforts to achieve interoperability and safely operate on our rail lines," said Greg Richardson, UP general director operating systems and practices.

UP now hosts 25 freight and passenger railroads that, under federal law, must achieve PTC interoperability by Dec. 31, 2020. Sixteen of those railroads are compliant, which encompasses 85 percent of UP's interoperable PTC train miles, UP officials said.

While its PTC infrastructure is in operation, UP continues working with its remaining partner railroads, which are expected to take necessary steps to reach interoperability by mid-2020, they said.

PTC is designed to prevent four types of incidents: train-to-train collisions; derailments caused by excessive speed; accidents that can occur if trains are routed down an incorrect track; and unauthorized train movement on track undergoing maintenance.