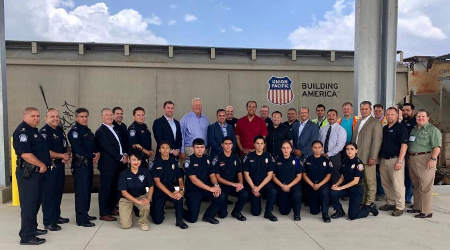 Organized by the National Railroad Construction and Maintenance Association (NRC), the tour "highlighted the importance of border security and international trade" for UP and the rail industry, NRC officials said in a press release.

UP is expanding the yard to boost capacity, enhance security and help relieve rail traffic congestion. The project calls for construction of a Customs & Border Protection secondary inspection facility, slot tracks and a rail inspection portal.

"Trade is the lifeblood of many communities in my district, including Eagle Pass," said Hurd. "This project not only created jobs in Eagle Pass, but will also reduce border wait times and facilitate the efficient flow of goods and services throughout the region."

Hurd's district includes more of the U.S.-Mexico border than any other member of Congress, NRC officials noted.

UP hauls more than 1,500 rail cars each day across the Eagle Pass port of entry. The Class I moves 70 percent of all freight-rail traffic to and from Mexico, and nearly 40 percent of the railroad's shipments have an international component.