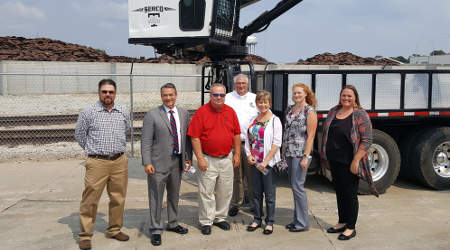 Omaha Track President and Owner Terry Peterson led the tour, which included visits to the new corporate office and the Omaha Track Equipment facility, where maintenance-of-way equipment is custom built, fabricated and maintained.

"Railroads invest tens of billions of dollars annually into their networks, supporting rail supply jobs across our country," said Peterson in a press release. "It is critical that our policy makers understand rail's importance to Omaha's continued success and growth."

Bacon is a co-sponsor of the Building Rail Access for Customers and the Economy (BRACE) Act, a bill now in Congress that would permanently extend the short line tax credit known as 45G.

Omaha Track has been serving the rail industry since 1983. Formerly the Tie Yard of Omaha, the company began by selling ties to landscapers. It since has grown into a  railroad material supply company and services contractor for Class Is, short lines and rail contractors across North America.