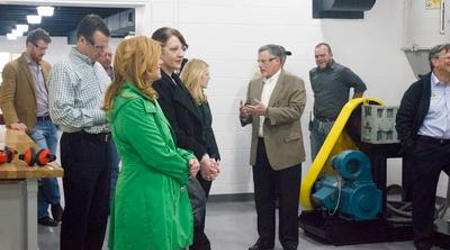 The tour was coordinated by the National Railroad Construction and Maintenance Association (NRC) and the Railway Engineering-Maintenance Suppliers Association (REMSA), according to a press release issued by the associations.

Axion President Claude Brown led the tour of the manufacturing facility, which continues to ramp up production and expects to nearly double its growth rate this year. The company's technology is used in the construction of military, vehicle and railroad bridges, along with heavy crane mats, temporary roadways and other railroad applications.

Flores' staff encouraged economic development in the region, as well as a focus on a safe and efficient freight- and transit-rail system to connect Texas's energy and agricultural producers to the global market.

In addition to taking the tour, the group discussed the Surface Transportation Board's reciprocal switching and commodity regulation proposals, which are of concern to the rail industry.