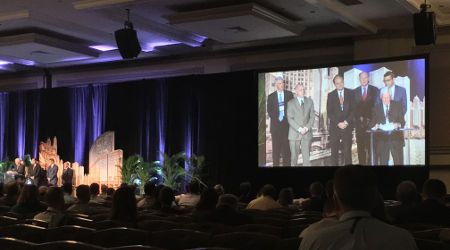 The award was presented yesterday at AREMA's annual conference and exposition in Chicago. The award honors the memory of William Walter Hay, a longtime association contributor and professor of railway civil engineering at the University of Illinois Urbana-Champaign.

Opened in 2014, the Fulton Center provides transfers between 10 subway lines and six stations, including those serving the World Trade Center site, according to Arup's website.

The $1.4 billion effort included the construction of the main transit center building, rehabilitation of four existing stations and construction of an underground pedestrian concourse. More than 300,000 people use the station each day, according to the Metropolitan Transportation Authority (MTA).

In 2016, the MTA received Leadership in Energy and Environmental Design (LEED®) Silver certification for the Fulton Center.