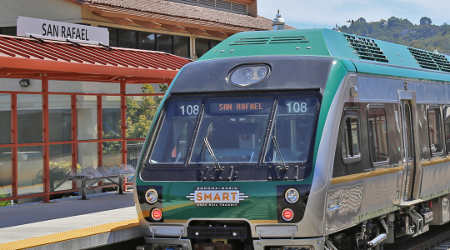 PTSI Transportation has completed its digital Route Learning System™ for New Jersey Transit's Newark light-rail line. The system is an operations training program used to teach the physical characteristics of a railroad to operating employees, rail or transit police and first responders. The Route Learning System consists of digital maps and charts, as well as a video of the railroad taken from the engineer's/ operator's perspective. The tool can be used in a training center, taken home for personal study or viewed on a screen in the operating cab to "enhance situation awareness," PTSI officials said in a press release.

The Denver Regional Transportation District's (RTD) commuter-rail station in Westminster, Colorado, has been named 2017 project of the year by the Colorado chapter of the American Public Works Association. HDR led station design, among other components of RTD's Eagle Public-Private Partnership. The Westminster station is a key component in the city's goal to be "the next urban center of the Colorado front range," HDR officials said in a press release. The station shares signature elements with other Eagle commuter-rail stations, such as a glass-and-steel elevator.

HNTB Corp. has hired Lance Donnelly as senior project engineer for traction power systems. Based in Philadelphia, Donnelly leads teams of engineers who design electrical traction systems used to power passenger trains. His experience includes a six-year stint as a project manager for Amtrak, where he was involved in projects throughout Pennsylvania, New Jersey and Washington, D.C. He also helped out with emergency repairs due to flooding caused by Hurricane Sandy.