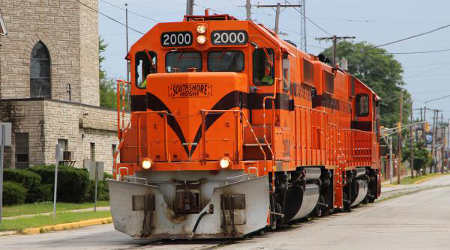 The award was presented at the 2018 ASLRRA Eastern Region meeting in Vermont earlier this month. Presented annually, the award recognizes short lines and regionals that post the best safety rate as reported by the Federal Railroad Administration.

CSS was recognized in the category for railroads with a maximum of 150,000 man-hours.

"We work hard to ensure that our employees go home safe, as well as provide safe service for our customers and the communities we work in and travel through," said CSS President Todd Bjornstad in a press release.

To qualify for the President's Award, a railroad also must have earned ASLRRA's Jake Award for achieving a better-than-industry average safety performance during the prior year. CSS earned a Jake With Distinction Award, which railroads received for operating without a personal injury in 2017.

Chicago South Shore & South Bend is a subsidiary of Anacostia Rail Holdings and operates 127 route miles of line providing freight-rail service between Chicago and South Bend, Indiana, connecting with all Chicago railroads and serving the Port of Chicago.