Meet Cathrin Banks, president of the Maryland and Delaware Railroad 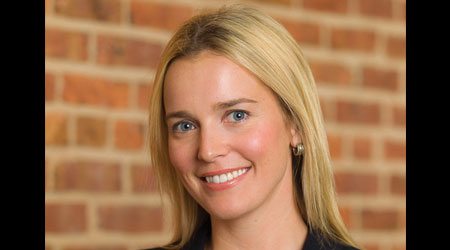 Until a few years ago, her personal experiences, educational background and career as a trial attorney made it unlikely she would become entrenched in the operations of a short line serving the Delmarva Peninsula. Yet on Jan. 1, the Maryland and Delaware Railroad Co. (MDDE) — which operates 120 miles of track on the Delmarva Peninsula in Delaware and Maryland — named Banks president. At 33, she is believed to be one of the youngest women to lead a U.S. railroad.

"I just fell in love with the courtroom," says Banks. "After law school, I got a clerkship for a judge and worked for a trial law firm and had a wonderful experience trying cases."

She spent several years trying cases for the prominent Baltimore law firm of Bekman, Marder & Adkins LLC. Prior to that stint, she worked for Maryland Senate President Thomas "Mike" Miller Jr., Maryland Comptroller Peter Franchot and the now-retired Albert Matricciani Jr., a judge on the Maryland Court of Special Appeals.

Within a few years of practicing law, however, Banks started thinking about a career change. The "antagonistic and tragic nature" of many of the lawsuits she worked on began to wear on her emotionally. She felt burned out.

"I thought about quitting being a lawyer and becoming a yoga teacher, doing a little writing and some pro bono work," she recalls. 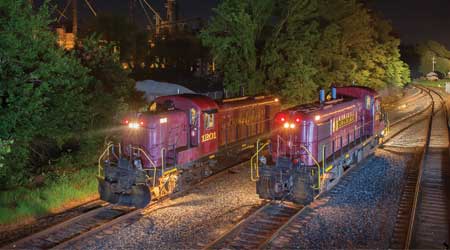 The Maryland and Delaware Railroad Co. serves the Delmarva Peninsula in Delaware and Maryland.
MDDE/Scott Harris

But before she let her Maryland license to practice law expire, Banks' stepfather came to her with an offer to help him out with some legal work at the MDDE. Edward Banks Jr., also a lawyer, had long chaired the MDDE's board and did legal work for the short line for decades. The railroad's managers and owners frequently visited the Banks' family home for meetings, so Cathrin became familiar with the railroad and the entire MDDE team as she grew up.

"The railroad was always in my periphery, but I was a girl who was into horses and field hockey, and the idea of going to work for the railroad someday just wasn't on my radar," she says of her childhood and teen years. "Fast forward to my late 20s, when I'm ready to leave the practice of law, and my dad says: 'Before you do that, I really need some help here; I don’t want to be this busy anymore.'"

At the time Cathrin starting thinking of changing careers, Edward Banks had recently retired from his law practice, although he had kept a few favorite clients, including the MDDE. By 2015, he was looking to cut back his work hours even further and asked Cathrin if she would be willing to do some part-time work for the MDDE as assistant general counsel.

She said yes. And that's all it took for her to get hooked on railroading.

"Around that time there was a lot going on at the railroad," Cathrin Banks explains. "We were looking at a potential lease transaction and there also were some business development projects going on. It was a great time for me to get involved."

A course in Railroading 101

She spent her first two months in the MDDE's back offices absorbing everything she could about the business from the railroad's managers and crew — a period she describes as a "Railroading 101" experience. In addition to working on contracts, she helped market the railroad, recruit new business and secure a state grant for infrastructure improvement. By 2016, she was named the railroad's vice president and general counsel, and at the start of this year she was promoted to president and general counsel. 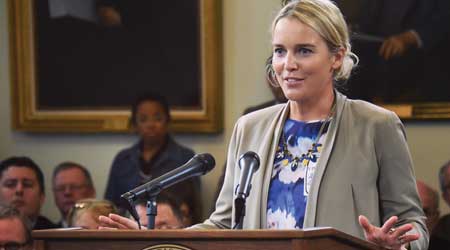 "Infrastructure is always a challenge for most short-line railroads." — Cathrin Banks

As the MDDE's president, Banks succeeded John Paredes, who led the short line from 1989 to 2003, and from 2017 to Jan. 1, 2019. He's stepping back — "he'll never really retire," Banks says — into the role of vice president. Also on the management team are General Manager Sam Pate, and Vice President Scott Harris, who primarily assists with technology-related operations. Banks' stepfather remains chairman. The railroad employs 15 people.

Like other short lines operating in the northeastern United States, the MDDE has a history rooted in the bankruptcy of Penn Central and other regional railroads that led to the creation of Conrail. When the Conrail system was drawn up, several small branch lines that needed minimal rail service and extended into rural parts of the Delmarva Peninsula were not in good operating condition. As a result, some were left out of the final Conrail plan and designated for abandonment.

But state politicians from Maryland and Delaware, who sought to preserve rail service along the peninsula and in rural areas, contracted with Conrail to operate them. In August 1977, the MDDE was created and soon after was chosen as an operator of three rail branches in the two states under a contract with the Maryland Department of Transportation (MDOT). Those branches formed what are now MDDE's mainlines: the Centreville between Townsend, Delaware, and Centreville, Maryland; the Chestertown between Massey and Worton, Maryland; and the Seaford between Seaford, Delaware, and Cambridge, Maryland.

In 2000, ownership of the branch that MDDE had been operating between Frankford, Delaware, and Snow Hill, Maryland, transferred from the Snow Hill Shippers Association to the railroad itself. Later, the MDDE in 2008 signed a 15-year extension with the state of Maryland to continue operating the Centreville/Chestertown and Seaford lines, according to a history posted on the MDDE’s website. The state continues to own the lines extending from Townsend to Chestertown/Centreville, and from Seaford to Cambridge.

Although the short line is still considered a direct line with Norfolk Southern Railway, the MDDE doesn't currently physically connect with NS.

As president, one of Banks' goals is to diversify the MDDE's revenue mix and grow the business. In its early days, the short line was closely tied to the region's poultry industry and related agricultural crops. But over the past decade or so, the makeup of MDDE's business has evolved.

"We still do quite a bit of agricultural products, but I would say about two-thirds of our business is industrial products. Propane, chemicals and paper are our three biggest commodities now," Banks says, declining to reveal the railroad’s annual carloads or operating revenue.

She attributes the change in business mix to a number of factors, including increased competition from the trucking industry — which prompted the short line to market its services to other businesses, such as metals, minerals, construction and waste. The MDDE also now serves a transload facility on the peninsula, and Banks hopes to expand transload services to other customers.

"One challenge that I see — which is probably the same as for other short lines in rural areas — is just finding ways to diversify the revenue stream," she says. "We have to get creative through things such as car storage and right-of-way management, as well as exploring things like transload opportunities."

Another potential growth opportunity under consideration? A passenger excursion route through scenic parts of the Snow Hill area.

"There are a couple of towns that are really quite lovely and I think well-suited for something like that," she says. "That's a big goal of mine and something I'd like to see through and make sure we’re getting good results from it."

Of course, she's also aiming to nurture and grow business on the state-owned routes and currently is shepherding a couple of projects along them. Banks declined to go into detail because the projects are in the early stages and have yet to obtain state government approvals, but one involves a new industrial plant and the other a facility expansion. She's been working with NS' industrial development team for guidance on conceptual plans that shippers could take to their construction and engineering contractors.

To be ready to accommodate new business opportunities — and to prepare for the trend toward heavier rail-car fleets — the MDDE has been in the midst of a track improvement project the past two years, especially on the Snow Hill line. To fund that project, the short line obtained a $2 million grant from MDOT, which called for a company match of at least $1 million. The state funding will be phased in over the next two years.

"Infrastructure is always a challenge for most short-line railroads," Banks says. "I think we were very fortunate to get this grant from the state. That will go a long way toward really upgrading the existing infrastructure."

Additionally, the MDDE needs to upgrade its aging fleet, according to Banks. The short line currently has six locomotives: two CF7s and an SW900 that it owns and three state-owned ALCO RS3ms. The railroad’s capital improvement plan already included the addition of a backhoe and some work trucks; over the next two to three years, Banks hopes to upgrade the locomotive fleet, as well.

The short line operates 120 miles of track in Delaware and Maryland.
MDDE/Scott Harris

Also at the top of her agenda is making sure the railroad continues its safety record, which has improved over the years, she says. The MDDE has been a consistent recipient of the American Short Line and Regional Railroad Association's Jake Safety Award.

“I heard stories from the 1970s and ’80s where it wasn’t uncommon for us to derail seven or eight times a week. That’s a safety and customer service issue,” Banks says. “So, over the years, the railroad worked to improve the infrastructure to make it a lot safer.”

A focus on customer service

Customer service improvements also remain on the radar, with GM Pate staying in touch with shippers on a daily basis, Banks says.

"If they need a switch tomorrow, they get a switch tomorrow," she says. "I think that level of white-glove service is something that only short lines can provide. That’s a big priority for us. We’ve done it very well and I think we’ll continue to find new and better ways to serve our customers."

Banks has brought a new enthusiasm and energy to the short line, says John Dalina, director of supply at Tri-Gas & Oil Co. Inc., a Federalsburg-based shipper of propane used in the poultry industry (to heat chicken houses) and a longtime MDDE customer. 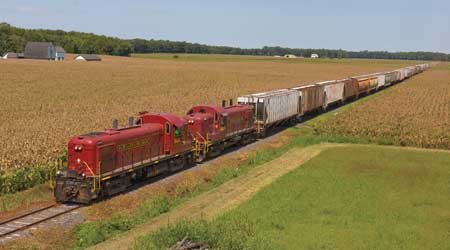 "From the moment we met about a year-and-a-half ago [I] could tell she was excited about taking the reins and steering the railroad in a new direction," he says, adding that in her role with the short line, Banks has worked with his company to find new business opportunities.

"She came in as a novice operating a railroad and she's done very, very well — at least from what I see — in trying to get more commodities and more cars rolling on their steel," Dalina says.

Banks credits the MDDE's management team members, former President Eric Callaway and her stepfather for being among her rail industry mentors.

"They got me into the business and taught me so much," she says.

Another source of inspiration was David Goode, the retired chairman, president, and chief executive officer of NS, who Banks says took the time early in her career to meet and share some industry wisdom with her.

She's also finding support among other women railroaders via the League of Railway Women (LRW), where she's become an active member. In fact, it was fellow LRW member and Mississippi Export Railroad President and CEO Kate Luce who inspired Banks to earn a conductor certification — a personal goal she hopes to complete sometime this year.

Looking even further ahead, Banks expects to keep a razor-sharp focus on "doing a good job leading this company," she says.

"I have big shoes to fill. I hope to live up to and exceed expectations," she adds. "I want to grow [the MDDE] to ensure that we'll be able to celebrate at least another 40 years in this business."