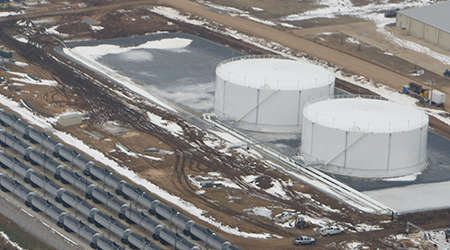 Retrofit work necessary to handle heavier grades of crude oil at the terminal was completed on time and under budget, company officials said in a press release. The terminal now provides a destination point for rail-to-pipeline shipments of heavy crude oil from the company's Hardisty terminal in western Canada.

The Stroud terminal is served by BNSF Railway Co. and Union Pacific Railroad via the Stillwater Central Railroad. Canadian Pacific originates the trains from the Hardisty terminal before switching to one of the U.S. carriers, said USD Partners spokeswoman Ashley Means Zavala in an email.

About 50 percent of the Stroud terminal's capacity is available and being marketed to current and future customers, company officials said.