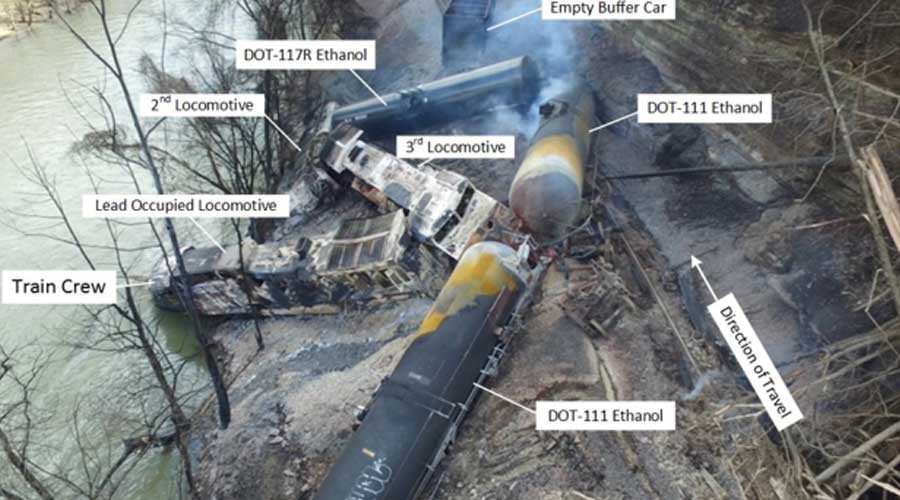 The National Transportation Safety Board (NTSB) yesterday issued a safety recommendation report that addresses placement of DOT-111 rail tank cars in high hazard flammable trains and the use of buffer cars for the protection of train crews.

The recommendation calls for all trains to have a minimum of five nonplacarded cars between any locomotive or occupied equipment transporting hazardous materials, regardless of train length and consist, NTSB officials said in a press release.

The recommendation stems from two separate derailments of high-hazard flammable trains — one in Draffin, Kentucky, and the other in Fort Worth, Texas — that resulted in breached tank cars and hazardous material fires. The NTSB is investigating both derailments.

The derailment in Draffin occurred Feb. 13, when a CSX ethanol unit train derailed three locomotives, one bugger car and four tank cars on a mountainside. The train had one buffer car at the head of the consist and one at the end of the train, with 96 denatured ethanol tank cars following the head buffer car.

In its safety recommendation report, the NTSB found that in both derailments, least protective DOT-111 tank cars were placed in positions that increased the risk of derailment and breaking of the tank cars, resulting in the release of their hazardous materials content. Additionally, in Draffin, the lead locomotives were separated from the hazardous materials tank cars by only one buffer car, which shortened the distance between the breached tank cars and the crew members, increasing the risk of injury or death.

The NTSB concluded that the severity of both accidents could have been less severe had the DOT-111 tank cars been placed in locations within the train where they were less likely to derail or to sustain accident damage, NTSB officials said.

Yesterday's report was not the first time NTSB has issued recommendations regarding the use of buffer cars to reduce the risks of hazardous materials to train crews, said Robert Hall, NTSB director of railroad, pipeline and hazardous materials.

"We believe that it is imperative that these recommendations be implemented to prevent the potential for a catastrophic event," Hall said.