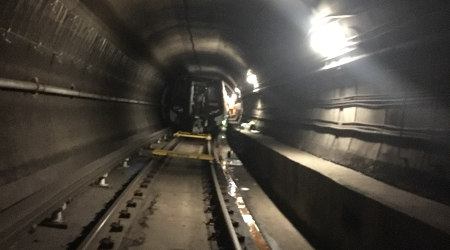 Water infiltration in tunnels has historically been the leading cause of insulator-related smoke/fire incidents, especially along the Red Line stretch between the Friendship Heights and Medical Center stations, WMATA officials said in a press release. That 3-mile segment accounted for about half of such incidents in recent years.

"That's because the Red Line's deep tunnels from Dupont Circle to Medical Center were constructed in the late 1970s and early 1980s, prior to the widespread use of a modern tunnel-waterproofing technique called … the New Austrian Tunneling Method," WMATA officials said.

Over the years, water caused premature deterioration of metal rail components while mud and sediment degraded the reliability of switches and signals, and created a damp environment that impacted the electrical current.

Working on weekends last year, crews drilled hundreds of holes in the tunnel ceiling, and then injected a polymer-based emulsion at high pressure that hardens and resists water infiltration. The waterproofing work and expanded maintenance hours led to a sharp decline in insulator-related smoke/fire incidents, WMATA officials said.

The agency plans to waterproof other parts of its system in the coming years. In 2019, crews will address a section of the Red Line near Forest Glen.