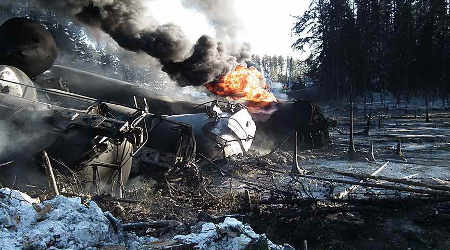 The Transportation Safety Board of Canada (TSB) yesterday called for Transport Canada to develop strategies aimed at reducing the severity of derailments involving hazardous materials.

The TSB's action is in response to a February 2015 derailment of a CN crude-oil unit train near Gogama, Ontario. The train was traveling below the 40 mph speed limit when 29 tank cars carrying crude oil derailed; 19 of the cars breached, releasing 1.7 million liters of oil, which ignited and caused fires that burned for five days.

The board has concerns that current speed limits may not be low enough for some trains, especially those carrying flammable liquids, said TSB Chair Kathy Fox in a press release.

The TSB is asking Transport Canada to look at all factors — including speed — that contribute to the severity of derailments and to develop mitigating strategies and amend rules accordingly, board officials said.

The cars involved in the derailment incident were Class 111s built to the newer CPC-1232 standard. Although the standard requires cars to have additional protective equipment, the TSB determined the train's speed had a direct impact on the severity of the tank-car damage.

Additionally, the lack of thermal protection contributed to thermal tears in the cars in the pool fire, leading to additional product release. The cars displayed similar performance issues as those involved in the Lac-Megantic, Quebec, derailment in July 2013, TSB officials said.

"While stronger tank cars are being built, the current ones will be in service for years to come," Fox said. "The risks will also remain until all of the factors leading to derailments and contributing to their severity are mitigated. This is the focus of the recommendation."

The TSB's investigation found that the derailment occurred when joint bars in the track failed. Pre-existing fatigue cracks in the bars at the site of the derailment had gone unnoticed in previous inspections, TSB officials said.

Once the cracks reached a critical size, the combination of cold temperatures and repetitive impacts from train wheels passing over the joint caused the bars to fail.