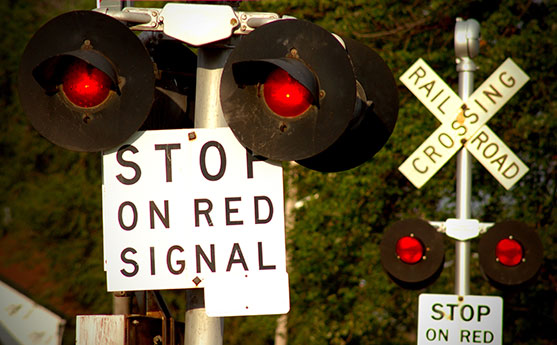 About every three hours somewhere in the United States, a person or vehicle is hit by a train.

That's a stark statistic that Operation Lifesaver Inc. volunteers and staff often cite when promoting their rail-safety message to a public audience. The nonprofit, national organization's mission is to spread the word about the dangers that exist around trains, track and other railroad property.

In recent months, the national office has been particularly busy responding to calls from news media and others seeking rail-safety advice following a spate of high-profile, fatal accidents between trains and motor vehicles, and trains and pedestrians. Those incidents included the tragic accident that killed six people in February, when a commuter train collided with an SUV at a rail crossing in Valhalla, N.Y.

The incidents appear to be part of a bigger story. Nationally, preliminary statistics from the Federal Railroad Administration reflect a disturbing development over the past year: In 2014, collisions at railroad crossings rose more than 8 percent; crossing-related deaths increased 15.6 percent; and pedestrian trespassing deaths spiked 22 percent.

The FRA numbers mark a reversal in trends.

"We had seen quite a significant decline over the last few decades, and we are concerned that the numbers for trespassing and crossing incidents now are on the rise," says Libby Rector Snipe, OLI's director of communications.

Why the change in direction? One reason could be that freight and passenger railroads are busier, with more trains on the tracks in recent years. But Snipe believes other factors are part of the story, as well.

"I think drivers are more distracted and may not be as aware as they need to be of the safety precautions that they need to take when they approach a rail crossing," Snipe says, noting that OLI promotes safety tips for motor vehicle drivers on its website. "We often say that the impact of a train hitting a car is the same as your car crushing a soda can under its tires. It’s no contest. That image helps people understand that you really have to be careful around crossings."

As for the increase in pedestrian trespassing fatalities, Snipe attributes that unfortunate statistic to a "general lack of understanding about the potential danger of being near tracks.”"

Which, unfortunately, means OLI still has a lot of work to do. And, through 50 state chapters, Operation Lifesaver volunteers are trying to spread the safety message by giving free presentations to school groups, drivers-ed classes, trucking firms, bus companies and community organizations.

OLI's also continuing its national "See Tracks? Think Train!" public awareness campaign, launched a year ago and distributed through the state chapters. The campaign's public service announcements have been broadcast nearly 79,000 times, mostly in the top 15 states for trespassing based on the FRA's preliminary 2013 statistics, Snipe says. The broadcasts have potentially reached an audience of 248 million people, she adds.

In 2014, the campaign focused on the anti-trespassing theme; this year, the campaign will feature a new, "compelling" video message about what happens when a car and train meet at a crossing, Snipe says, adding that the new spot will be unveiled in early June.

The uptick in trespass and crossing fatalities also has OLI chapters looking to recruit more volunteers. Last year, about 2,000 Operation Lifesaver volunteers gave a total 24,062 presentations and organized more than 1,600 special events to reach an audience of 2.3 million people. This year, they'd like to reach an even bigger audience.

"We are really interested in bringing in younger people to volunteer because we think a message from a younger person resonates more with younger audiences," says Snipe. "The earlier we can get the [rail safety] message out to people, the more we think that message will be successful."