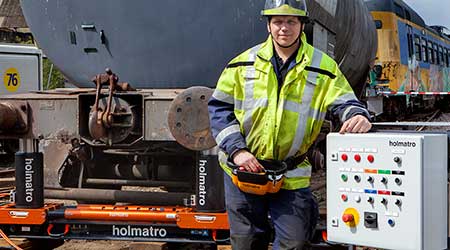 Following a period of "intensive cooperation" with a Dutch rail infrastructure management company, Holmatro Industrial Equipment says it has developed a new rerailing system. Designed to get derailed trains back on the tracks quicker, safer and with more control, the system will be operational this summer, Holmatro says.

"Our client was looking for an innovative rerailing system in which their years of experience could be processed,” says Holmatro Sales Manager Diederik Bekkering.

"The result of the close collaboration was astounding — a rerailing system completely adapted to our requirements, equipped with the most modern technology," says the infrastructure management company's team leader/accident prevention.

The rerailing system is driven by a Holmatro Quatro pump featuring four segregated exits, which "guarantees uniform and controlled cylinder strokes," according to Holmatro. The Quatro pump can be operated using a wireless remote control, which enables the operator to move freely around the rail vehicle. In addition, the pump does not have to be in the vicinity of the tracks: It can remain out of the way in the "breakdown" vehicle, the company says. Constructed of components that are easy to assemble and disassemble, the system is "at least 50 percent lighter than other systems" available in the market, the company says.