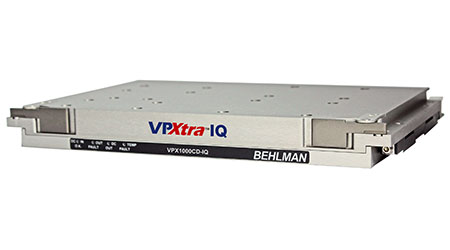 Introduced in 2012, the 6U Behlman VPXtra™ Power Supplies shattered the power ceiling that had previously limited the capabilities of VPX system designers. Now, Behlman also shatters the useful performance ceiling with their new VPXtra™ 1000CD-IQ, which has a high level of internal intelligence that supports communication, measurement and control. This intelligence upgrade gives VPX system designers the capability to create more compact systems with fewer additional instruments needed to accomplish their communication, measurement and control functions.

"Contrary to what many people think, a power supply can do a lot more than just supply power. As we watched VPX system designers working towards ever-smaller systems with more capabilities, we realized that some of the systems' required communication, measurement and control functions could be integrated into our VPXtra™ Power Supplies, to save space and improve system functions. I congratulate the Behlman engineers for their visionary approach, which made the world’s highest power VPX power supply also the most intelligent," said Behlman President Ron Storm.

VPXtra™ 1000CD-IQ is Vita 62 compliant, and designed to power Open VPX modules. Its dual outputs offer 960 watts of 12 VDC and an auxiliary 3.3 VDC. Standard features include overvoltage, over current, short circuit and thermal protection, and the 12 VDC output can be paralleled for higher power and fail-safe redundancy. Its "IQ" capabilities include the ability to monitor and report all output voltages; output current; input voltage; input current; and temperature. It also supports ANSI/VITA 46 signals for geographical addressing, NVMRO (Non-Volatile Memory Read Only) and SYSRESET.