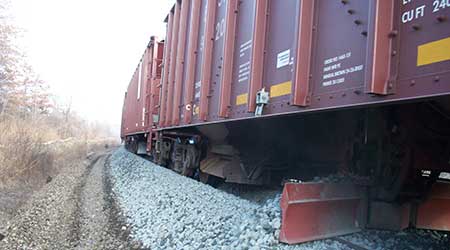 The Center Mounted Bi-Directional Ballast Plow from Montana Hydraulics is a versatile, productive and safe add-on ballast plow. The center mount and self-articulating blades allow it to plow ballast in either direction, and the blade angle changes automatically when the direction of the car changes. It is a compact, simple unit that is easy to install and there's minimal maintenance, the company says. The blades fold and positive lock within plate C for transport.

The plow uses the car’s existing power system, including remote control operation. Fully integrated controls are provide with power beyond, but does not interfere with the other hydraulic needs of the car. It incorporates manual releases for safety locks from either side and plow operation keeps the operator safely away from the car.

The company has been building plows as part of new-car builds since 2011 and currently has 180 plows actively operating on ballast cars. The plow is available both as part of new car builds and retrofits. The Montana Hydraulics plow will be on display as part of a new ballast car at Railway Interchange 2015 outdoor exhibit 216. The company's indoor booth: 4908.