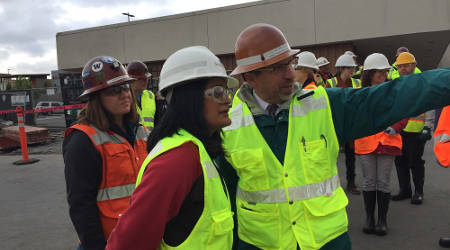 When it opens for service in 2021, the 4.3-mile extension will provide a 14-minute ride between Seattle's Northgate neighborhood and downtown.

Jayapal and Sound Transit Chief Executive Officer Peter Rogoff emphasized the need for federal funding for the planned Lynnwood Link extension, which calls for adding 8.5 miles of light-rail north of the Northgate Station.

The agreement was scheduled to be executed in 2018, but the Trump administration has proposed zeroing out funding for future FFGAs, including the one for Lynnwood Link, according to a Sound Transit press release.

Congress approved the first $100 million installment of the FFGA in May.

"Our region is doing its part to fund the growth of our mass transit system. But without strong federal partnership, project timelines will be thrown off and residents will continue to struggle with congestion," Jayapal said.

Jayapal's tour was carried out in partnership with Absher Construction Co., which is the contractor for the Northgate Station.

General Manager Michael Robbins led the tour of the short line, which provides service from a Union Pacific connection at Eldorado, Arkansas, to Lille, Louisiana. The railroad transports chemical and forest products.

During the visit, Westerman focused on the role the short line railroads play in the Arkansas economy.

Westerman's district has the most short lines of any U.S. congressional district, according to a press release issued by Chambers, Conlon & Hartwell LLC. The firm lobbies on behalf of the American Short Line and Regional Railroad Association.

"Investment in rail infrastructure expands economic opportunity for manufacturers and other job creators," Westerman said. "Make no mistake — the investment made by the Ouachita Railroad Co. and other short line railroads in Arkansas boosts our economy and employs Arkansans in good-paying jobs."

A rail stakeholder group on the tour discussed the 45G short-line tax credit, which expired Dec. 31, 2016. The credit, which provided a 50-cent tax credit for every dollar spent on track improvements, is key to "maintaining a reliable and safe freight network," according to the news release.