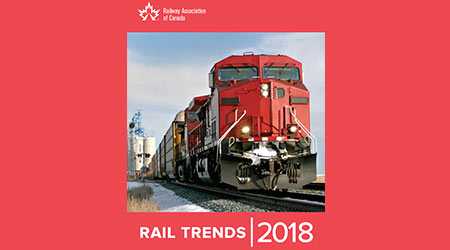 Canada's railways logged "record results" in 2017, the Railway Association of Canada (RAC) announced this week as it released its 2018 industry report.

RAC's "Rail Trends 2018" contains industry performance data from 2017 and a rolling 190-year review of statistics that reflect rail performance, from safety and fuel efficiency to infrastructure investment to productivity.

According to the report, in 2017:
• Freight-rail traffic, as measured in revenue-ton miles, increased 7.4 percent over 2016;
• Canadian railways moved a record number of originated carloads — more than 5.2 million — and reduced freight rates for a second consecutive year;
• Passenger carriers transported a record 84 million people;
• Freight and passenger railways experienced their lowest accident rates on record, while the rate of accidents involving dangerous goods was at an all-time low; and
• more than CA$1.8 billion was invested in the Canadian network and CA$1.7 billion in taxes were paid.

The report's data comes from RAC members, which include Class Is, short lines and tourist, intercity and commuter railroads.