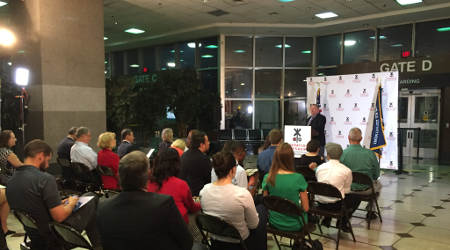 Although the number of people injured or killed in vehicle-train collisions is on the decline, the number of pedestrian deaths and injuries in rail-trespass incidents is on the rise, Operation Lifesaver Inc. (OLI) announced yesterday.

In 2016, 1,104 people were hurt or killed in vehicle-train collisions, marking a 13.7 percent decrease compared with 2015 statistics, according to preliminary Federal Railroad Administration data released by OLI.

However, 980 pedestrians were killed or injured walking on or near tracks — a 12.9 percent increase over 2015.

"While the number of highway-rail crossing collisions, deaths and injuries has dropped over the past five decades, it's still a startling fact that about every three hours in the U.S., a person or vehicle is hit by a train," OLI President and Chief Executive Officer Bonnie Murphy said at a press conference yesterday.

OLI held the conference to kick off the United States' first national coordinated Rail Safety Week, which runs through Saturday.

Although states have held their own rail safety weeks, this year's event is the first time a national event has been organized in the United States. Canada has held a Rail Safety Week in April over the past several years, OLI spokeswoman Libby Rector-Snipe said in an email.

Known as Operation Clear Track, the effort involves stationing local, state, federal and railroad police at crossings or trespassing locations in states around the country.

OLI is holding other safety events throughout the week.