For North American railroads, the year 2011 likely will go down in the record books for the unusually large impact an unusually high number of natural disasters have had on their networks.

Since late 2010, crews from many North American freight and passenger railroads have been working around the clock to repair track, bridges, facilities and equipment damaged or affected by floods, tornadoes, hurricanes, droughts, heat spells and wildfires. As of late September, natural disasters had been declared in all but two states this year, according to national media reports.

In addition to protecting and repairing infrastructure, railroads have had to address the natural disasters' impact on customer service. BNSF Railway Co., Union Pacific Railroad, CSX Transportation, Amtrak and several other freight and passenger railroads have used websites and social networks such as Facebook and Twitter to keep customers apprised of delays and reroutes due to flooding or damage caused by various storms.

BNSF, for example, faced widespread flooding in one of its busiest corridors along the Missouri River, where access to the St. Joseph Subdivision in Missouri was severed. In letters, photos and detailed videos posted on the Class I's website, BNSF kept customers informed of flood recovery efforts, which included rerouting as many as 40 percent of its trains and temporarily relocating as many as 500 train crew employees to rerouted areas. The railroad expected to spend more than $300 million “to restore and harden our network,” BNSF Executive Vice President and Chief Marketing Officer John Lanigan wrote in an Aug. 11 letter to customers.

On the passenger-rail side, some East Coast agencies still were recovering as of press time from Hurricane Irene-related damage inflicted in late August. MTA Metro-North Railroad, for example, doesn't expect to restore train service completely along its Port Jervis Line until year's end. 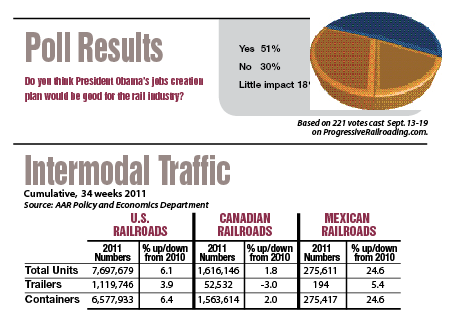