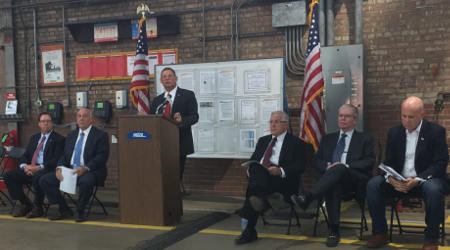 Metra has finished installing positive train control (PTC) components on all its trains and all communications and signal systems, the railroad announced yesterday.

The railroad is working with 13 other railroads in the Chicago area on its PTC implementation plans, he added.

"No one else in the country works with 13 other railroads," Derwinski said. "The cooperation that happens now in the industry — not just here in Chicago, but nationwide — has changed, and it's changed us for the better." 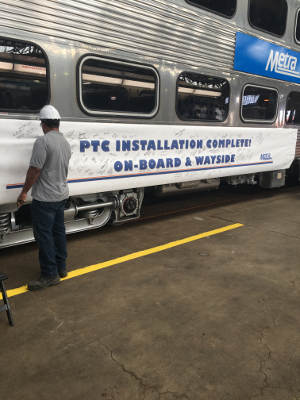 The component installation is one of the first four requirements that Metra must meet by the year's end to receive a deadline extension from the Federal Railroad Administration to implement PTC across its system. The other three requirements that Metra must meet are to acquire radio spectrum, complete worker training on the new technology and begin a revenue service demonstration on a line.

Metra already has acquired the needed radio spectrum, and in October, it will complete worker training and begin a revenue service demonstration on its Rock Island Line.

Metra's announcement comes after Batory last week told a congressional panel that nine passenger railroads are at risk of failing to qualify for an extension to implement PTC.

PTC has been a "sophisticated and unprecedented technology challenge," said Knueppel, who's overseeing the technology's implementation on SEPTA's Regional Rail system.

For Metra, PTC implementation is expected to cost about $400 million. Funding has been a "major challenge," railroad officials said. The railroad has received about $43 million in federal PTC grants, but will have to cover the remaining costs with its own capital resources.