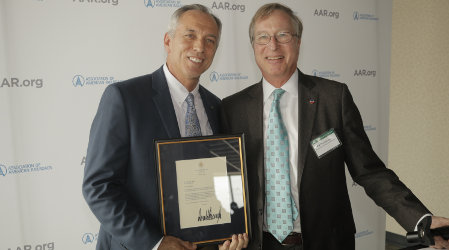 The award is named in honor of the late Rhode Island senator, who was a strong advocate for sustainability and rail’s environmental benefits. The Chafee award recognizes a railroad employee who has demonstrated the highest level of environmental stewardship in the previous year.

Bailey developed a culture at CSX where design and construction methodologies benefit both the environment and the railroad, AAR officials said in a press release. His collaborative approach with environmental teams has had a significant impact on the environmental performance of the Class I, they added.

By modifying the design on two siding projects, Bailey helped reduce the amount of excavated rock, soil and debris going to landfills by over 24,000 cubic yards. His efforts also have helped protect several endangered plant and animal species, including the Northern Long-Eared Bat in Indiana and the Gopher Tortoise in Florida, AAR officials said.

"Now more than ever, private industries must step up and do all they can to preserve the environment for future generations. Railroads are at the forefront of sustainable freight transportation, protecting the environment and efficiently delivering nearly half of the goods this country relies on," said AAR President and Chief Executive Officer Ed Hamberger. "Charles Bailey's hands-on leadership has helped build and extend a legacy of stewardship and responsibility at CSX."