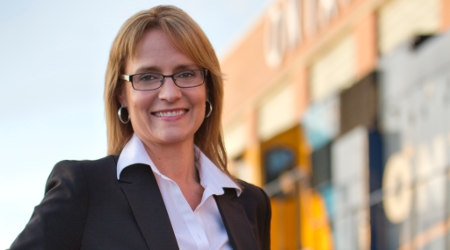 As the first woman to lead a major Canadian railway company and as a member of the League of Railway Women (LRW), Moore is trying to raise awareness among girls and young women that they can and should look to the rail industry for a wide range of career opportunities.

"It's really great that we have an organization like the LRW, because, unfortunately, we still need associations like this to recognize and support the growth of women," says Moore, who was honored by the LRW in September with the 2018 Woman of the Year Award. "We all have to understand that women and men can do any of these [rail] jobs. And my role — and that of many of the people in this organization — is to change the way society views women."

Broadening the potential hiring pool to include more women and people of diverse backgrounds is especially important in today's times, as the rail industry seeks to fill job openings resulting from an aging workforce, Moore believes. Recruiting a younger workforce — of both women and men — also has been a topic of discussion at the Railway Association of Canada (RAC), where Moore recently joined the board. She is the RAC's first female director, according to her LRW nomination statement.

"One of the things we talked about at our last [RAC] board meeting was how do we go out and promote careers in the industry," says Moore. "I'm doing as many speaking engagements as I can to make that [issue] part of the conversation. I love talking about the career opportunities that we have here at Ontario Northland and in the industry as a whole."

She agrees with research that suggests that having a diverse workforce is good for a company's bottom line.

"We [at Ontario Northland] have been quick to point out that we see [diversity] as a competitive advantage," says Moore. "If we have an organization that’s made up of men and women and people of different backgrounds, you will get very different perspectives and thoughts. In my opinion, men and women think differently about things and that is good thing when you have that around the table."

She joined ONTC in 2005 as director of telecommunications, then later was named chief operating officer and vice president of the refurbishment division, where she directed several external remanufacturing contracts, led labor negotiations with the ONTC's five union groups and modernized operating processes.

Based in North Bay, ONTC is a Crown agency of the government of Ontario. The agency provides freight rail and passenger services in northern Ontario through Ontario Northland Railway and Ontario Northland Motor Coach Services. The organization also offers rail equipment refurbishment and remanufacturing to external customers.

Prior to joining ONTC,  Moore was in business process engineering in the telecommunications and technology industries, serving North American and European markets. She grew up in northern Ontario and attended the University of Waterloo, where she studied engineering and business administration.

As ONTC's top executive, she has sought a range of perspectives for reviving the organization, which in 2012 was under the threat of divestiture by Ontario's provincial government.

Under divestiture, the ONTC's railway, bus and telecommunications divisions were to be sold. But two years later, provincial officials changed course and determined ONTC would remain in public hands, although the telecommunications division was ultimately sold. Moore was named interim CEO in 2014 (and permanent CEO a year later) and charged with transforming ONTC into an efficient and profitable organization.

She and the executive team started by developing "Moving Forward," a program designed to stabilize the organization and then advance it to a position of long-term sustainability. But doing so would require a new way of thinking by everyone at the company. Founded in 1902, ONTC had a business culture that was formed by decisions made generations ago, Moore says.

"We didn't lose sight of our history and the passionate employees that were rallying around Ontario Northland," she says. "But the transformation plan made all of us look outside our organization to see what other railroads were doing to set key performance indicators that were aligned with industry standards."

Listening to employees, customers was key
In drafting the turnaround plan, Moore met with employees to get their thoughts on what needed to be done to save ONTC. Many of those ideas — from implementing lean manufacturing processes to eliminating wasteful tasks — were adopted, and as the transformation plan evolved, a business culture shift at ONTC began to occur.

Moore believes the most important trait in a business leader is to have solid listening skills. So it was important to her to solicit feedback from employees in order to secure their buy-in of the turnaround plan.

"The way forward is never exactly the way you think it's going to be," she says. "And you have to create an environment where people can innovate, experiment and really understand that it doesn’t matter what title you have, everyone can have a real impact on the organization."

In choosing Moore for this year's Woman of the Year Award, the LRW praised her skillful leadership in turning around a major Canadian railroad company. Her award nomination described the situation: "Employees could see their ideas and suggestions being implemented, so they knew [Moore] was listening and valuing their input. You could see the management silos breaking and a collaborative, engaged, dynamic and diverse workforce emerging."

During the transformation, some longtime ONTC employees left the company and new workers joined, bringing with them different experiences and perspectives. Moore ended up having to hire 200 new faces to replace those who moved on during the company's financially troubled times and its transition. Today, ONTC employs about 750 people.

"We also had a lot more women applying to what used to be male-dominated roles," says Moore. "And when you have that type of diversity around a brainstorming table, you get innovative ideas. I think that helped the momentum of the transformation program."

Also as part of Moving Forward, the executive team quizzed ONTC customers and passengers to find out what they wanted in terms of better service. The information received prompted some improvements, such as the addition of WiFi and online ticketing to its bus service.

Moreover, ONTC diversified its businesses in search of new customers and sources of revenue.

"We started implementing transload hubs across our freight line so that we could attract off-rail customers and gain new revenue for the same rail line," Moore says. "We took the mechanical functions for fixing our own internal rail assets, commercialized them, and now we have several external rail customers in our shop using our skill sets and experience."

At its remanufacturing and repair center in North Bay, Ontario Northland provides passenger-car remanufacturing, tank-car inspection and repair and freight-car repair. And earlier this year, ONTC announced that it had obtained new line boring equipment for locomotive overhaul projects. Ontario Northland Railway is now the only railroad in Canada to offer in-house line boring capabilities to external customers, including engine overhauls for marine, power generation and other transportation providers, according to the company.

Transforming Ontario, too
Looking ahead, Moore says ONTC will remain on a continuous-improvement path and, in so doing, work toward making northern Ontario a better place in which to live and do business.

"We're really trying to make sure that people don’t lose sight of our customers and passengers and why we’ve been successful over the past few years," she says. "No more 'command-and-control' and those historical ways of managing the railway here. It's all about collaboration and inclusion at all levels."

Also key to future success: Ensuring ONTC maintains the confidence of its "stakeholders" — the local communities and province it serves, Moore says.

"We want to keep aligned with the mayors and economic development officers on how to attract business within their communities," she explains. "We also report to the provincial government, and they've shown a lot of confidence in us as we've enhanced our bottom line and reduced our funding requirements."

The province, in turn, has allowed ONTC to expand its motor coach services and provided it with a 10-year capital plan that includes funding for infrastructure improvements. Eventually, Moore hopes ONTC can serve as an "innovation center" to help the Canadian government tackle transportation planning and climate change issues.