Women on the line: Railroads still lag when it comes to hiring women, but Class Is aim to pick up the pace

When Cassandra Mullee graduated with a B.S. in international business from the College of Charleston in 2008, she knew she wanted to be in logistics and supply chain management — an internship with a trucking logistics company convinced her. She never considered a rail career until she met Norfolk Southern Railway recruiters at a college career fair.

“The economy was bad in 2008, and NS prided themselves on having never laid off a supervisor," says Mullee, now an NS trainmaster. "Rail is a stable industry.”

And while Mullee also applied for positions with Proctor & Gamble as well as some third-party logistics companies, she ultimately chose NS. She joined the railroad as a management trainee, spending 13 months rotating through different territories on the system, starting in Chicago in transportation management, then moving to Roanoke, Va., to learn marketing and complete her engineering training in Elkhart, Ind.

Prior to her year-long onboarding process, Mullee didn't know much about the industry, just like many new rail hires. But rail isn't an industry in which women see themselves as outsiders, if the sentiments expressed during a series of recent interviews are any indication. Although major North American railroads continue to lag in the hiring of women, Class I hiring managers say they're making efforts to get more females on board — and, once they've signed on, to keep them there. 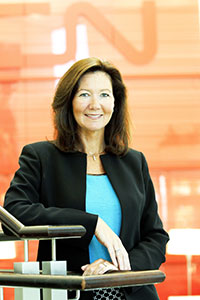 It's a process — an evolutionary one. Kelly Levis, who joined CN in 1997 as a commodity manager, recalls the first industry conference she attended.   “I was one of three women in a room of over 400 men,” she says with a chuckle. “They asked me if I was there to take notes.”

“Last year we hired over 300 women,” Bronsard says. “One hundred were in skilled trades and operations.”

But the number of women working in rail remains surprisingly low. Although only 5 percent of S&P 500 companies have female CEOs (there are no women CEOs among the seven Class Is), 45 percent of the total S&P 500 workforce is female.

At Union Pacific Railroad, 6 percent of its total workforce is female, with 17 percent of senior management positions occupied by women, according to UP's 2014 Sustainability Report. BNSF Railway Co. employs about 3,000 women, according to the Association of American Railroads. With a total headcount of 40,000, that means women make up just over 7 percent of BNSF's employment roster.

Those figures are mirrored at CSX Corp., where 7 percent of the employee base is female; only 1 percent hold train and engine positions, a number that has held steady since 2009, says Corporate Communications Manager Kaitlyn Barrett. Although NS doesn’t breakdown overall numbers, the Class I's agreement workforce is 7 percent to 8 percent female, and 20 percent on the non-agreement side are women, says NS Manager of Human Resources Planning Sharona Stimpson.

Meanwhile, 23 percent of Amtrak's employees are women with 21.6 percent on the agreement side and 31.7 percent on the non-agreement side, says Senior Director of Talent Acquisition Pashon Mann, nothing that the majority of women working at the national passenger railroad serve in marketing and sales, general counsel, human capital, emergency management and corporate security.

In many cases, women come to the railroad because they are attracted to its mission to move people safely across the country, connecting people and communities — or to the complexity of the industry and the challenges that come with it, Mann says.

“Where [else] can you go every day and impact the economy so significantly?” she asks. 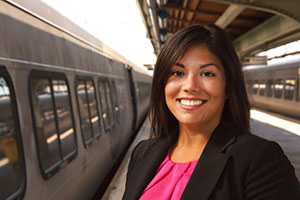 Julia Quinn joined Amtrak five years ago after stints with a Fortune 500 company and a boutique public relations firm. Amtrak hired her to help launch their foray into social media.

“I wanted to garner experience working for a major U.S. brand,” says Quinn, Amtrak's director of public relations. “I felt it was a place where I could come in and grow.”

She knew little about railroading prior to joining Amtrak.

“It’s a very specialized industry,” she says. “I never realized I’d learn so much working with so many subject matter experts.”

And that specialized knowledge is one reason Quinn believes railroads invest so much energy in onboarding.

"It takes time to develop talent that understands this industry,” she says.

At NS, most women serve on the transportation side, Stimpson says. Engineering occupations are where women are the least represented.

“Some of that is indicative of the type of degrees,” Stimpson says, noting that women currently are more likely to have degrees in business than engineering.

Competition for top engineering talent, too, is fierce.

“For electrical and civil engineering jobs, we’re in competition with a lot of other companies,” Stimpson says.

And there are some women who come to rail for the very same reasons generations of railroaders have — family connections. 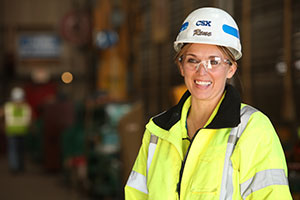 “My grandfather was a brakeman,” says CSX Senior General Foreman René Foley, who joined the railroad 14 years ago as an extra board clerk. "I’d always had a passion for the railroad.”

Foley says she likes “the technical side" of railroading. She also likes building trains.

“I haven’t found it intimidating,” says Foley, who today supervises 70 employees and is responsible for hundreds of miles of track. “The challenge was to prove that I could do it, not that a female could do it.”

NS's Mullee, too, says she has not been intimidated working in what is still very much a male-oriented environment.

“My office is in Dearborn, Mich., and there are no other female supervisors here,” she says. “You just grow accustomed to working in a male-dominated industry.”

That said, Mullee adds: “I don’t believe I’m looked at in a different light because I’m a female trainmaster.”

Evolving perceptions may be playing a part.

“I don’t have to prove myself in the same way to be taken seriously,” says CN's Levis, noting that she's on this ride for the long haul. “I see the railroad as a puzzle. I get to do a lot of problem solving. I’ve never been bored in 18 years.”

Recruiting more women to work on the railroad is critical, particularly for a passenger line like Amtrak, Mann believes.

“We are like any other industry,” she says. “We need to represent who are consumers are. Everyone rides trains. They want to see people who look like them running these trains.”

Amtrak's Quinn, who admits to feeling like a bit of a pioneer, agrees.

“The railroad industry will benefit from strong, business-minded women,” she says. “If you’re not intimidated by being the only person in a skirt in the conference room sometimes, it’s an industry you should get into. There is so much potential here, and rail is constantly evolving. I often feel a sense of pride in being the only female in a conference room. I feel like I’m helping to break that glass ceiling.”

How Class Is aim to recruit more women employees

• They're targeting women’s professional organizations when looking for new hires or advertising positions. Organizations include the Society of Women Engineers, and Women in Technology and Trades.

• They're creating affinity groups. WiNS, for example, is a decade-old women’s networking group at Norfolk Southern Railway. CSX Transportation has a Women’s Network Group, as well. NS also hosts a Women in Operations event to help women across the NS system connect.

• They're connecting new hires with “buddies.” At Amtrak, new employees, male and female, are hooked up with a more experienced employee to whom they can go for basic questions, networking and advice.

• They're inviting female college and high school students on site. CN operates a program called Aspire that brings potential future railroaders on site. The idea: educate them about the career opportunities in the industry.

• They're launching ambassadorship initiatives. CN has about 600 employees who promote job opportunities on the railroad within their own professional and social networks. One in three new hires was referred by an existing employee, says Virginie Bronsard, CN's senior director of human resources.

• They're offering strong onboarding programs. Every Class I has one and the programs vary. For example, NS has a year-long management trainee program, while CN has a three-year onboarding process.

• They're providing internships for existing employees. CN recently developed the CN Internship for Women, where existing female employees can choose to go on “functional” assignments for four months. They might work in a car shop or fix locomotives. It gives women a sense of the working conditions in the field and a greater understanding of the railroad as a whole. Kelly Levis, who now is vice president of CN's industrial products unit, went through conductor training and gained certification as a conductor.