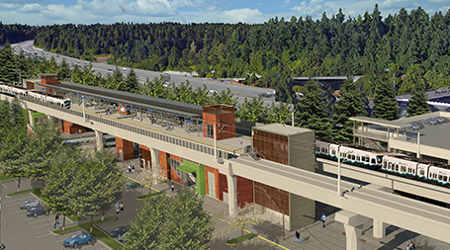 The $3.07 billion project calls for extending light rail 8.5 miles from Seattle's Northgate neighborhood to a transit center in Lynnwood, Washington.

Once those requirements are completed, the grantee is eligible to apply for and execute an FFGA with the FTA.

After the FTA has reviewed the project and negotiated and prepared the FFGA with Sound Transit, the application must be reviewed by the U.S. Department of Transportation and other members of the President Trump's administration.

The Tacoma Dome project includes construction of a new light-rail operations and maintenance facility to accommodate additional fleet capacity. The specific location of the facility will be determined during project development.

Sound Transit's board has executed a $10.3 million contract with HDR Engineering to begin project development services.