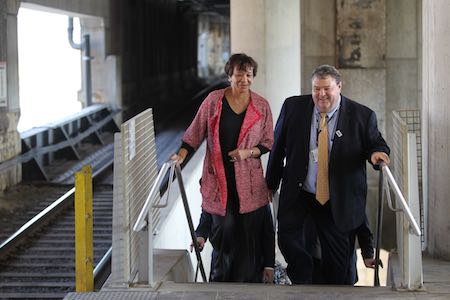 The tour began at the Civic Center Transit Center in downtown St. Louis, which serves both MetroLink light-rail lines. In April, crews began working on a $10.5 million project  to expand the hub.

When completed late next year, the center will include digital messaging boards, an indoor waiting area and concessions. The expanded center also will provide access for Amtrak and Greyhound riders who arrive and depart from the adjacent Gateway Multimodal Transportation Center.

The next stop on the tour was the Laclede's Landing MetroLink Station, where Flowers saw the work completed on the CityArchRiver project. Metro Transit received $1 million federal grant to raise Leonor K. Sullivan Boulevard to minimize the flooding impact from the Mississippi River on the St. Louis Riverfront.

Federal funds supported 91 percent of the costs to rehab the 142-year-old bridge.