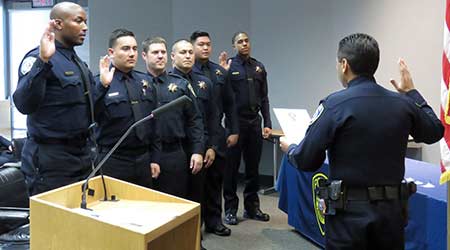 On Monday, the Bay Area Rapid Transit Police Department (BART PD) swore in six lateral police officers — the most the department has sworn in at one time in recent history, agency officials said in an April 29 press release.

So far this year, the department has hired 19 officers and "will easily surpass" last year’s total of 24, agency officials said, citing an "aggressive recruitment effort" aimed at reducing the  officer vacancy rate from a high of 41 down to 20 as of this week.

During the past two years, arrests have surged 56 percent, agency officials said.

BART PD is offering a $15,000 hiring bonus for academy graduates or experienced officers — $7,500 upon hire and $7,500 upon completion of a field training program.

More hires could be coming on board: BART will propose adding 19 new police officers in the next fiscal year budget, which begins July 1.

In December 2018, BART’s board approved a new four-year contract with the agency's police officers, agreeing to a labor package that "brings its officers closer to average salaries in the Bay Area," agency officials said. BART police officers' annual salary ranges between $110,000 to $160,000.