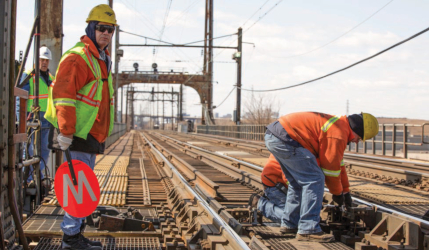 The remaining construction of the 2.3 mile-long bridge project will begin following the U.S. Department of Transportation's (USDOT) approval of a funding application that NJ Transit submitted last year.

"The current Portal Bridge is a frequent source of delays and frustration for our customers," said NJ Transit Executive Director Kevin Corbett said in a press release. "With the completion of this milestone on time and on budget, we eagerly await the USDOT's approval of our funding application to maintain forward progress on this vital project. We are one step closer to improving the reliability and predictability our customers deserve as they commute to and from work, school and recreation."

The new bridge will increase NJ Transit's capacity by 10 percent and allow trains to move faster and more reliably over the Hackensack River, according to NJ Transit officials.

In spring 2018, NJ Transit's board approved a financing agreement with the New Jersey Economic Development Authority that provides up to $600 million toward the construction of a new Portal Bridge.