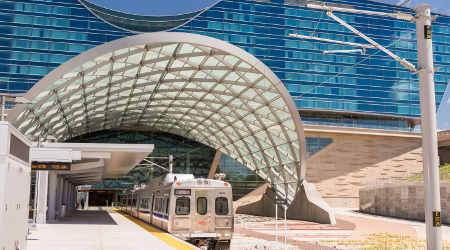 The Regional Transportation District of Denver (RTD) has received approval from the Federal Railroad Administration (FRA) and Colorado Public Utilities Commission  (CPUC) to remove crossing attendants or "flaggers" from six of 11 grade crossings on the University of Colorado A Line.

The line operates between Denver Union Station and Denver International Airport. Denver Transit Partners, which operates the line under contract to RTD, will begin removing the flaggers in a phased approach starting Friday.

The approved crossings are at Havana, Chambers, Clayton, Dahlia, Holly and Steele streets, according to an RTD press release.

The removal of the flaggers at some of the crossings is a milestone for the line's development. RTD is working with the FRA and CPUC on final approvals and flagger removal on the remaining crossings. The approvals also are an important step in the process to establish quiet zones along the line, RTD officials said.

"Over the past two years, we have safely and reliably carried more than 12 million passengers on the University of Colorado A Line," said RTD General Manager and Chief Executive Officer Dave Genova. "The flagger removal reflects the final approval by the FRA and CPUC that the University of Colorado's A Line wireless crossing-gate technology is acceptable and effective."

The A Line is part of RTD's FasTracks program. To learn more about FasTracks, read this month's cover story in Progressive Railroading.