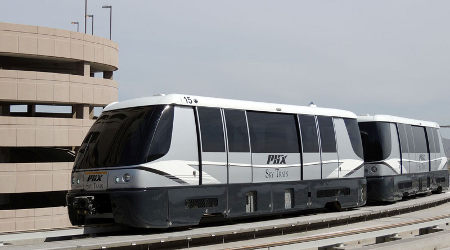 The city of Phoenix has awarded a $305 million contract to Bombardier Transportation for an extension of the PHX Sky Train automated people mover system at the Phoenix Sky Harbor International Airport.

The agreement covers a 2.5-mile extension to the airport's rental car center, along with two new stations, an expansion of the system's maintenance facility and the supply of 24 Innovia APM 200 vehicles.

The contract includes options for three additional vehicles, as well as various vehicle retrofits and upgrades, Bombardier officials said in a press release.

Under contracts awarded in 2009 for the first stage of the people mover system, Bombardier designed and supplied all electrical and mechanical equipment, including its Cityflo 650 automatic train control technology. In addition, the company has provided operations and maintenance services since the system opened in 2013.