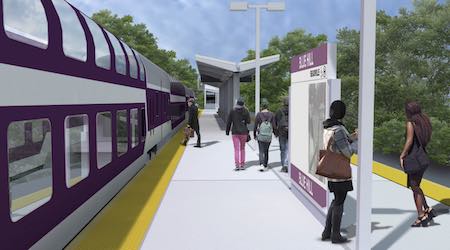 The Blue Hill Avenue Station will be the ninth station for the MBTA's Fairmount commuter-rail line. Riders will be able to travel from the station to downtown Boston in 20 minutes with no transfers, agency officials said in a press release.

The new station will be 6.5 miles from South Station and a quarter mile from Mattapan Square. The station design includes one center-island platform between Blue Hill Avenue and Cummins Highway, as well as two covered pedestrian ramps.

Seven firms submitted bids for the project; McCourt's was the lowest at $16.79 million.

The MBTA last introduced a commuter-rail station in September 2016, when it opened the Wachusett Station on the Fitchburg Line.