An Altamont Corridor Express (ACE) train derailed between Fremont and Pleasanton, Calif., yesterday, after it struck a fallen tree during a rain storm.

Of the more than 200 passengers onboard, nine were injured. Four were transported to local hospitals, ACE officials said in an incident update. No fatalities were reported. 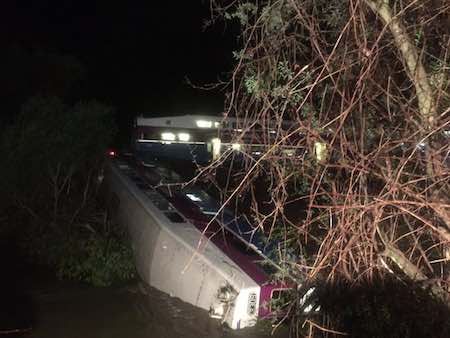 The Federal Railroad Administration (FRA) announced on Twitter today that its investigators are on the scene of the incident in Sunol, Calif., an unincorporated town about 45 miles east of San Francisco.

As a result of the derailment, one rail car fell into a nearby swollen creek, the San Jose Mercury News reported.

The commuter railroad has cancelled service for today.