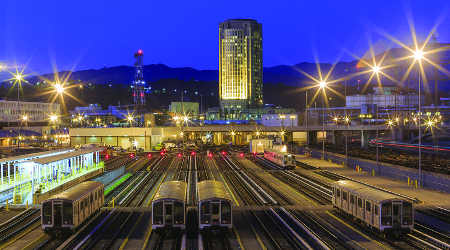 Those are just some of the major issues that are keeping transit agency leaders busy beyond their day-to-day operations of trains and buses, according to survey responses the agencies submitted for the 2018 edition of Progressive Railroading’s “Passenger Rail at a Glance” report.

Many of this year’s comments are similar to topics that agency leaders have raised on surveys in previous years. One challenge that’s surfaced more recently is the cost and time associated with meeting the federal mandate to implement positive train control (PTC). The deadline is Dec. 31, although commuter railroads may be granted a two-year extension if they meet certain requirements as defined by the Federal Railroad Administration.

The Seattle-area agency noted that the Trump administration’s proposed budget for fiscal-year 2019 called for cutting federal grants that support building new mass transit projects. If that were to happen, it would “cause far-reaching impacts on the construction of voter-approved projects in the Puget Sound region, with the most immediate being elimination of $1.17 billion in New Starts funding for Lynnwood Link light-rail extension,” Sound Transit officials wrote on their survey.  “It would also block a grant request for extending light-rail to Federal Way.”

Slated for completion in 2024, the $2.9 billion Lynnwood Link Extension would continue Sound Transit light-rail service 8.5 miles into Snohomish County, adding four stations. The Federal Way Link Extension would continue the light-rail route south from SeaTac, about 2 miles south of the airport, to Federal Way on a 7.6-mile primarily elevated alignment with three stations.

Sound Transit officials also expressed concern about the potential impact of a citizen initiative that aims to roll back a portion of taxes that voters approved for transportation projects in 2016.

“The state Legislature could choose to enact the tax rollback if [the initiative] qualifies for the ballot or pass it along to statewide voters to consider next November,” Sound Transit officials wrote.

Following is a sampling of other transit agencies' answers to the question: “What are some of the hot issues or challenges your agency is dealing with right now?

Metropolitan Transit Authority of Harris County, Texas (METRO)
Recovery from “Tropical Storm Harvey” remains a challenge, as does the “procurement and replacement of a traction power substation.”

Northeast Illinois Regional Commuter Railroad Corp. (Metra)
“Adequate capital funding to return the railroad to a state of good repair has been an ongoing need. Aging equipment and infrastructure requires an annual investment of $1.2 billion over the next decade to achieve a state of good repair. Metra’s annual capital program provides less than a sixth of that amount.”

Regional Transportation District of Denver (RTD)
“Employee retention and recruitment. Rail ridership has increased, while bus ridership has decreased. Annual RTD ridership is down, but it’s down notable less than other transit agencies around the U.S.”

Southeastern Pennsylvania Transportation Authority (SEPTA)
“SEPTA is now in a position to reinvest in the system at a greater level than has been possible before. There are many projects planned with the intention of restoring this legacy transit system to a state of good repair. Investing in the infrastructure without negatively impacting service requires a significant amount of program planning and coordination.”

Trinity Railway Express (TRE)
“Balancing the capital cost of PTC, implementation of PTC and the other capital improvements is proving to be a challenge for the TRE. Launching major capital improvement projects — such as the Medical District Drive and Trinity River double-tracking and bridge repairs and replacements — also provides significant reconfiguration management challenges for the implementation of PTC and for general passenger-service operations.”