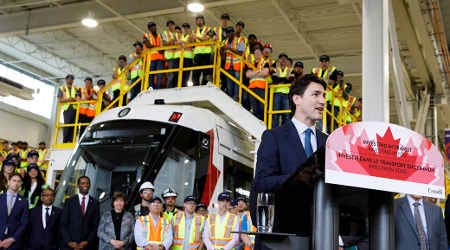 As public transportation leaders in the United States continue to wait for details about President Donald Trump’s proposed $1 trillion infrastructure plan, Canadians are forging ahead with a number of transit expansion projects of national significance.

In total, the Canadian government plans to invest CA$11.9 billion in public infrastructure over five years, beginning in 2016.

An institutional investor that oversees public pension plans in Quebec, CDPQ is providing CA$3 billion toward the CA$6 billion project, which is known as the Reseau Electrique Metropolitain (REM). The Quebec government earlier this year committed CA$1.28 billion toward the REM.

The system would include 27 stations connecting downtown Montreal, suburban areas and Montreal-Pierre Elliott Trudeau International Airport. When completed, the REM would be the fourth largest automated transportation system in the world after Singapore, Dubai and Vancouver, according to the project website. The system is expected to be in operation by 2020’s end.

“The REM is one of the most ambitious public transportation projects in our history,” Trudeau said in a press release. “In addition to making it quicker and easier for millions of Quebec residents to get around, the REM will reduce the number of cars on the roads, help ease traffic and make the air cleaner.”

A day after the REM funding announcement, Trudeau pledged to provide CA$1.09 billion for extensions to Ottawa’s O-Train network.

Expected to cost CA$3.6 billion, the project involves building 23 miles of rail and 23 new stations. Both the Confederation and Trillium lines will be extended.

When construction is completed in 2023, 70 percent of Ottawa residents will live within 3 miles of light-rail service, according to Trudeau’s office.

Finally, on June 23, Ontario Transportation Minister Steven Del Duca announced the Canadian government will commit up to CA$333 million for the Finch West light-rail project in Toronto. Slated to cost CA$1.2 billion, the project involves building a 6.83-mile light-rail line along the surface of Finch Avenue.

The route will originate at the Toronto Transit Commission’s future Finch West subway station on the Toronto-York Spadina expansion. Compared to existing bus service, the light-rail line will provide faster trips along the Finch West corridor, according to Infrastructure Canada officials.