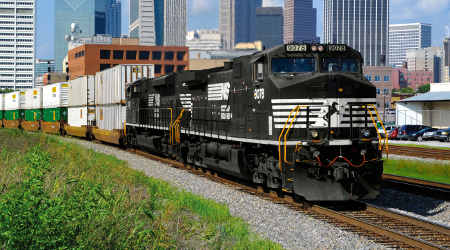 Norfolk Southern Corp. second-quarter 2017 net income rose 23 percent to $497 million, or $1.71 per diluted share, compared with the same quarter a year ago, the Class I reported this morning.

The profit growth was driven by a 15 percent increase in railway operations income, and an all-time record operating ratio of 66.3 percent, according to an NS press release.

Coal revenue increased 32 percent to $447 million during the quarter, while intermodal volume rose 10 percent to $593 million compared with the same period last year.

"Norfolk Southern's strong financial results and all-time record operating ratio reflect the power of our team, successful execution of our dynamic plan, and focus on operating even more efficiently while providing high quality service to customers," said Chairman, President and Chief Executive Officer James Squires. "We remain committed to our core pillars of safety, service, stewardship and growth as we continue to enhance operations across the organization."

The company is confident in its ability to reach its goals and deliver shareholder value in the near and long terms, he added.

"As a result of our achievements to date and the confidence we have in our outlook, we are increasing this year's share repurchase guidance by 25 percent to $1 billion,” Squires said.

In a call with analysts, Squires said that the company anticipates reaching a sub-65 operating ratio by 2020 or sooner.

NS executives also talked about how the railroad is achieving its goals as part of its long-term strategic plan to streamline operations, improve customer service and increase traffic, revenue and profit.