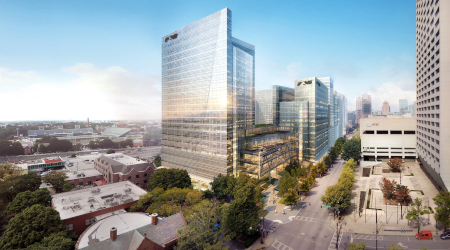 NS has hired Atlanta-based Cousins Properties to oversee construction of the new complex. Located on 3.4 acres at 650 West Peachtree St., the two-tower glass structure will feature 750,000 square feet of space. A campus-style hub will connect the towers, according to an NS press release.

Squires said the new headquarters marks a new chapter in the railroad's history. NS announced in December that it would relocate its headquarters from Norfolk, Virginia, to Atlanta. At yesterday's ceremony, Squires thanked the Georgia Department of Economic Development and Invest Atlanta for their support of the company in making the move.

“It’s a great day in Georgia when a Fortune 500 company returns home to its Atlanta roots and breaks ground on a beautiful new headquarters building in Midtown,” said Kemp in the NS press release. "Norfolk Southern is an outstanding employer and civic partner, and I look forward to seeing them grow and prosper here in Georgia.”

Through Southern Railway and other predecessor railroads, NS traces its roots in Atlanta to the mid-1840s. Currently, more than 2,000 NS employees work in Midtown Atlanta at the NS Peachtree Street operations center, which is about a mile from the headquarters site.

The site is in an area known as Tech Square, a hub of innovation and technology in Midtown Atlanta, with close ties to Georgia Tech, a source of talent for NS' management trainee program, NS officials said.

In addition, the site offers "easy access" to the Metropolitan Atlanta Rapid Transit Authority, highways and the Hartsfield-Jackson Atlanta International Airport. It's also close to the NS rail network, they said.

Plans call for the building to be completed and occupied by third-quarter 2021.

Sutherland joined NS in 2018 as VP of law. Prior to NS, she held government and corporate legal positions, including serving as CEO and chair of the U.S. Chemical Safety and Hazard Investigation Board and as chief counsel with the U.S. Pipeline and Hazardous Materials Safety Administration. In her new position, Sutherland will oversee legal matters.

All three will report to Squires.

"Norfolk Southern’s new strategic plan is a mission to transform our company for next-generation railroading," said Squires in a press release. "John, Annie, and Vanessa are ideally suited, and now, perfectly positioned to ‘Reimagine Possible’ to better serve customers, drive shareholder value, help employees thrive, and support the communities across our network."