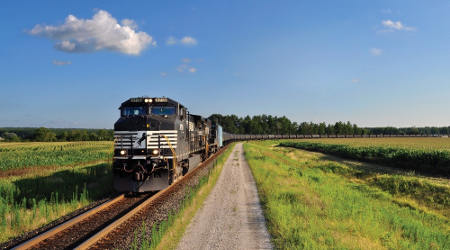 The Class I set new Q1 highs or lows for: earnings per share at $1.93, up 30 percent year over year; net income at $552 million, up 27 percent; income from operations at $835 million, up 10 percent; and the operating ratio at 69.3, down 1.3 points. A lower effective income tax rate helped boost net income, NS officials said in a press release.

Meanwhile, railway operating expenses increased only 4 percent — or by $64 million year over year — to $1.9 billion as higher fuel prices and increased costs associated with lower network velocity were offset by efficiency gains, NS officials said. Fuel costs jumped 25 percent to $266 million as the price for a gallon of diesel climbed 21 percent in the quarter.

“We are pleased with the continued improvement in our financial performance and the growth in our business,” said NS Chairman, President and Chief Executive Officer James Squires. “We are focused on improving service for our customers to position us for future growth and efficiency that will benefit both our customers and shareholders.”

The outlook for the remainder of 2018 is promising, he said.

“We are increasing our expected annual share repurchases to $1.5 billion, confident that we will deliver strong financial performance,” said Squires.