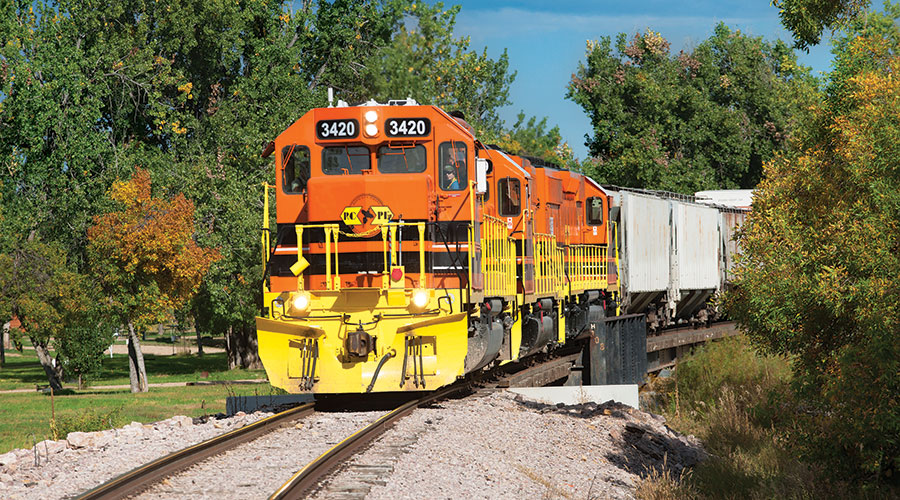 There are a variety of commodity groups that Genesee & Wyoming Inc. (G&W) relies on to build traffic and boost revenue in North America. They run the gamut from chemicals and plastics to intermodal to minerals and stone to lumber and forest products.

The best-case scenario for the short-line holding company is to register carload gains in each group, but that’s typically implausible given market fluctuations and economic swings. Yet there is a marketing strategy G&W has honed of late that at least boosts its chances of scoring more traffic of all kinds in the United States and Canada: industrial development (ID).

The strategy calls for working with shippers, state and local economic development authorities, utilities and others to identify properties along lines operated by G&W’s 114 regionals and short lines that can be developed into industrial plants or terminals.

G&W’s regional ID managers help interested shippers review their freight-moving requirements, locate potential sites, develop a design for a siding or other necessary rail infrastructure and finalize a transportation agreement. A staff engineer assists with site and track designs, and helps determine if a proposed industrial facility can fit on a certain property. 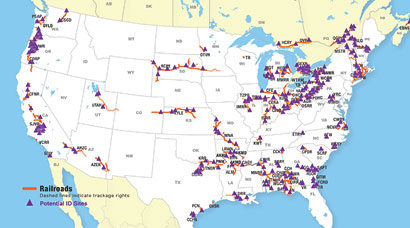 A map shows hundreds of available rail-served sites in the United States and Canada along the more than 13,000 track miles managed by G&W’s 114 regionals and short lines.
Genesee & Wyoming Inc.

“We need to make sure we have a site that works for the potential customer,” Peters says. “If they are new to rail or a company overseas that’s not familiar with the U.S. rail system, we try to educate them, get them to understand how rail works. We want to make it as easy as possible.”

G&W managers also work closely with Class Is on ID projects since the new traffic generated by a project likely will be interchanged with one or more large railroads. In addition, they try to educate economic and community development corporations on the available properties for any potential local projects, says G&W Senior Vice President of Distribution Services Mike Webb.

Another aspect of the ID strategy is to pull in carloads from non-rail-served facilities via transload facilities and terminals served by G&W railroads. Currently, there are 529 transload, reload and warehouse facilities located along the company’s network in North America.

About five years ago, G&W strived to develop a more focused approach to ID. Efforts to build business through that strategy accelerated after G&W accumulated many more railroads through acquisitions, such as the 2012 purchase of RailAmerica Inc. and its 45 regionals and short lines, Peters says.

Now, the company’s pipeline of industrial projects is as substantial as it’s ever been, and across all commodity groups, G&W Chairman, President and Chief Executive Officer Jack Hellmann said during a first-quarter earnings conference on April 30.

“Based on what we’re seeing right now and on the pipeline of industrial growth projects that we have … it’s not skewed toward one commodity group or another. Normally, there will be a year where the new development opportunities are in energy or there will be a single commodity focus,” Hellmann said. “From a macro standpoint, I wouldn’t be surprised at all if a few major projects hatched … over the course of the coming year.”

G&W could use a traffic boost because in 2019’s first quarter, carloads declined about 3 percent year over year to 393,857 units, although freight revenue rose more than 2 percent to $251.7 million.

“What’s unusual about today versus the past few years is the commercial development pipeline is as adaptive as we’ve seen for a long time,” Hellmann said. “We feel like we’re comfortably ahead of plan for what we think we can land in 2019 in terms of new business development.”

G&W already has landed some significant projects this year. In April, the company announced its Georgia Central Railway LP (GC) subsidiary will serve a new $172 million plastics distribution facility that’s under construction for Plastic Express in Pooler, Georgia. To open in October, the facility will be located in the 197-acre Savannah Port Logistics Center near the Port of Savannah.

GC — which interchanges with CSX, Norfolk Southern Railway and G&W’s Heart of Georgia Railroad — will transport bulk plastic resin to the multi-commodity transload center. The resin and other bulk commodities will be repackaged and trucked to the port for export to international markets.

“How this ties into the Port of Savannah and export opportunities shows how the plastics supply chain is changing in the U.S.,” Peters says. “The nation was mostly an importer before, and now is becoming an exporter.”

The Plastic Express facility is projected to generate more than 5,000 carloads annually.

“We see significant growth thereafter in partnership with the two connecting Class I carriers,” Hellmann said.

A matter of Choice

Also in April, G&W marked the opening of a Choice Terminal™ bulk transfer facility on a line operated by its San Joaquin Valley Railroad Co. (SJVR) subsidiary in Millux, California. The company has branded its bulk transfer facility network as Choice to reflect how shippers can choose among several railroads to move their freight, says SVP Webb. The 371-mile SJVR interchanges with BNSF Railway Co. and Union Pacific Railroad.

Targeting customers who aren’t directly rail served, Choice Terminals are used to transfer bulk materials between rail and truck. The facilities typically handle agricultural, industrial and petroleum products, but can accommodate any bulk product. Customers can receive inbound bulk raw materials via rail, hold them at the terminal and then have them delivered by truck on a just-in-time basis. Outbound bulk products can be transported to the terminal via truck and then loaded onto trains.

The Choice Terminal now served by SJVR is located about 20 miles southwest of Bakersfield and close to Interstate 5. Initially serving clay customers, the facility features an on-site truck scale and the capacity to accommodate 20 rail cars. Choice Terminals typically are owned by a G&W railroad, but the Millux facility is managed and operated by SJVR, Webb says.

“We embrace all transloaders and reloaders, and manage that relationship to get their business,” he says. “We count them as a salesforce. Extending the relationship can bring on new customers who perhaps are not rail served now or are entirely new to rail.”

The Millux facility is the fourth Choice Terminal in G&W’s network. The fifth will be a facility underway in Bainbridge, Georgia, along a line operated by the Georgia Southwestern Railroad, which interchanges with CSX, NS, and the Heart of Georgia and Hilton & Albany railroads. The company worked with an economic development corporation on the Bainbridge terminal, which is slated to open in the third quarter, Webb says.

CFE interchanges with all the Class Is except Kansas City Southern, as well as with several regionals and short lines operating in the Chicago area. The 323-mile CFE also serves transload terminals in Lima and Van Wert, Ohio.

There’s yet another new facility that’s the end result of G&W’s ID efforts: a Ringneck Energy ethanol plant in Onida, South Dakota, that opened in May. The $150 million facility — which is projected to distill 80 million gallons of ethanol and produce 240,000 tons of dried distillers grains (DDGs) annually — is served by G&W’s Rapid City, Pierre and Eastern Railroad (RCP&E).

The 739-mile RCP&E connects with BNSF, Canadian Pacific and UP. The regional interchanges traffic from the Ringneck plant with one Class I, says Peters, who declined to identify the large railroad because a contract hasn’t been finalized.

The RCP&E already has been serving an ethanol-related plant in South Dakota since summer 2017. Operated by Novita Nutrition, the Brookings facility produces cattle feed from DDGs provided by a local ethanol facility. Novita has the option to use either BNSF, CP or UP to help move the cattle feed to destinations, Peters says.

“We provided them flexible service at startup,” he says. “We also provide them with a flexible switching program.”

“We were able to market rail to another customer,” Peters says. “It exploits the rail economics.”

Continuing to market the company’s ID resources and expertise will help drive additional projects going forward. The diversity of carloads helps ensure G&W has the expertise in many different commodities, Peters says. An ID project can be developed in as little as a year, although it typically takes two to three years.

“We constantly think about ways to attract new business and help existing businesses expand along our railroads,” Peters says. “It’s important to make sure it will be a rail user for a project.”

For now, the ID outlook is very positive, Hellmann believes.

“In terms of the broader outlook, business is growing,” he said during the April 30 earnings call. “Obviously, people are investing in facilities across our industrial customer base right now because we’re merely a reflection of the deployment of capital that’s going on in the broader economy.”