How are Class I railroads faring when it comes to recruiting information technology talent? 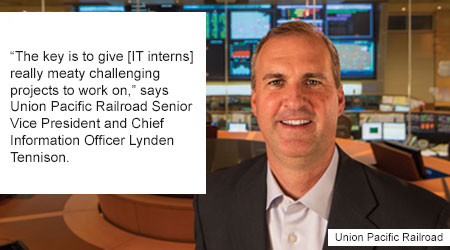 With information technology department personnel developing complex enterprise architecture to manage everything from freight scheduling to data resource management, many railroaders know how much their industry relies on IT to keep freight trains running efficiently. But outsiders still tend to see rail in an anything-but-high-tech light. For railroad IT recruiters, that can be a huge hurdle to clear, especially when railroad human resources staff are trying to recruit IT talent.

How do you compete with the sexiness of Google or Facebook? Or the out-of-this-world “campus life” of a place like Apple?

“Facebook and Google may be great places to work, but because they’re so large, it’s easy to get pigeonholed into doing just one thing,” says Karol Lawrence, assistant vice president of information technology at Norfolk Southern Railway.

The chances of spending your life in a cubicle completing the same IT functions over and over when you’re working in IT for a Class I railroad? Slim to none. That’s what ultimately attracts top IT talent to the rail industry. But for Class Is, the trick is getting that talent in the door to see what a future in railroad IT can look like.

In the past, it was tough to get IT recruits even to consider catching a glimpse of that future. Ten years ago, when Union Pacific Railroad IT recruiters went to college career fairs, they’d see long lines in front of booths from organizations such as Oracle, Google and Facebook. As for traffic at the UP booth?

Tennison and his team have been working to change that perception. UP employs 1,500 IT staff; including contractors, that number shoots up to as many as 2,300. UP hires 75 to 100 IT employees annually. The department has an attrition rate of 5 percent, of which retirements account for half, he says.

One of UP’s key recruitment strategies is to build “a solid pipeline” with universities, Tennison says, adding that the railroad leverages year-round and summer internships.

Each summer, UP brings in 40 to 50 IT interns who could hail from any of two dozen top U.S. technical schools. But Tennison’s team zeroes in on eight to 10 of the schools, including the Georgia Institute of Technology, University of Texas, Purdue University, Carnegie Mellon University and University of Michigan. Typically sophomores or juniors, the students work for 10 to 11 weeks at UP headquarters in Omaha, Neb. The railroad covers their apartment rent, meals and transportation costs — on top of a monthly stipend of $3,500 to $3,800.

“It’s low-risk for them,” Tennison notes. “But the key is to give them really meaty, challenging projects to work on.”

In other words, UP interns won’t be making photocopies or fetching coffee: The IT department pairs interns with Ph.D.-level employees to solve company problems. For example, one intern this summer worked on writing an algorithm to identify parts of a rail car. At summer’s end, interns present their work to Tennison and senior staff. UP also has 40 to 60 interns working onsite during the school year. Students come from nearby institutions such as the University of Nebraska-Omaha, University of Nebraska-Lincoln and University of Nebraska-Kearney, as well as Iowa State University.

“We have a low attrition rate because of those internships,” Tennison explains, noting that the interns who sign on as full-timers have a solid sense of what to expect as well as a strong professional and social network in Omaha.

In addition to engaging in real-world problem solving, students also benefit from UP’s IT Welcome Committee. Developed by employees who were recent college graduates, the committee provides interns with a local social network, organizing dinners, movies, bowling, canoeing outings and other events.

“By the end of the summer, the interns have a lot of new friends here in Omaha,” Tennison says.

And, typically, UP ends up with more IT talent. Since 2010, 109 interns came on board as full-time employees. Of those, 104 remain with the railroad. More than 50 percent of UP’s IT interns return to the company as employees, Tennison says.

UP isn’t just targeting students; half of all new IT hires at UP are seasoned workers. While the IT department does post on conventional online job boards like Monster.com, it doesn’t enlist recruitment firms and relies to a large degree on word of mouth, with many employees starting as contractors.

“People have to feel like they make a difference,” Tennison says. “We operate through small team projects. Even if it’s a big project, we divide it into small teams, so employees can see they’re making an impact.”

“People know coming in they have career progression potential,” he says. “And even if you’re a technical person, you can get to the executive level [but] we won’t force you to manage people.”

Heads in the cloud

But Class I execs aren’t resting on their recent recruitment and retention laurels — they know the competition for talent is and will continue to be fierce.

NS’ Lawrence says recruitment of IT professionals has gotten even tougher in the last year, particularly when recruiting for new and emerging technologies. While IT work on the railroads used to be about the mainframe, today’s tech workers need to be able to build and work on cloud technologies, as well as develop enterprise architecture.

With Silicon Valley’s continuing price hikes in everything from real estate to
basic living expenses, a lot of high-tech firms have been choosing other locales like Denver, Dallas and Atlanta, where NS has 550 IT employees and 300 IT contractors, according to Lawrence. The unemployment rate among IT professionals in Atlanta stands at about 2 percent, she adds.

Despite the competition, NS has had success recruiting interns and new hires at area colleges, including Auburn University, Clemson University, Georgia Southern University and Georgia State University. NS hires interns, or co-ops — typically, about 15 per semester.

“We partner with IT departments at the schools who can help us articulate the kind of career offerings we have,” says NS Manager of Recruiting Patrick Rickard.

The conversion rate from co-op to full-time employee is 25 percent to 30 percent, he says. As UP does, NS aims to ensure co-ops are working on development or system administration projects that offer challenges and opportunities to make a difference. It’s been a bit more challenging when the railroad seeks experienced candidates, however.

“Our old ways of doing things aren’t working anymore,” says Lawrence, noting that NS has had minimal success of late landing IT talent via online job boards and headhunters.

Meanwhile, the railroad has lost a number of talented IT professionals to firms that approached them through technology blogs and bulletins or social media outlets like LinkedIn. Lawrence would like to see NS turn the tables and seek out highly skilled IT professionals working elsewhere — in other words, consider “targeting people who aren’t looking for jobs.”

“If we can get people in the door, we do pretty well,” she says. “We have a great Midtown (Atlanta) location close to restaurants and museums, and we have a good story to tell in terms of the diversity of projects people can work on.”

For the past three years, NS’ retention rate for IT employees is 84 percent.

“I’m surprised we don’t lose more, given how active the market space is,” Lawrence says.

CN, too, faces a highly competitive local marketplace in Montreal. As CN Vice President and Chief Information Officer Serge Leduc notes, Google and Microsoft aren’t the problem. Although CN is one of the largest employers in Montreal, the city also is home to a number of large telecommunications companies and banks — both of which require a large take when it comes to IT hires.

Currently, CN has about 900 permanent IT employees and 250 contractors. During the past five years, the average annual attrition rate has been 5.3 percent, Leduc says.

CN relies heavily on its referral program, which provides financial incentives to existing employees to recruit new hires, Leduc says. About 15 percent of new hires come from existing employee recruitment, and the retention rate for referred hires stands at 86 percent. Most of CN’s interns also are referred by existing staff. CN brings on 20 to 30 student interns each summer.

“A lot of our employees start as consultants or contractors, too,” Leduc says. “That’s far more commonplace in IT than in other departments.”

A lot of contractors, too, hope to move into positions as full-time hires, Leduc adds. There aren’t many large companies in Montreal that allow IT personnel to make what Leduc calls “lateral moves.” At CN, IT employees have the opportunity to work on a range of projects and develop expertise in a variety of areas — from working on systems that manage freight scheduling to developing technologies to help rail employees more quickly diagnose mechanical issues with equipment.

“They don’t need to switch companies to do something different or learn new technologies,” Leduc says. “Here, we really do it all.”

Tennison, who joined UP 23 years ago after having previously worked at four different tech companies, can definitely vouch for the range of opportunities the freight rail industry offers.

“I never believed then I’d be here 23 years down the road,” he acknowledges. “But there’s so much diversity of work here.”

That means every day in railroad IT is different. That’s a pretty far cry from a cubicle at Google.