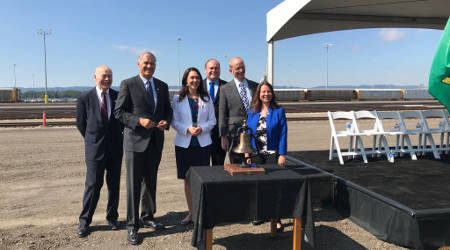 The decade-long project is designed to improve freight-rail movement through the port and along BNSF Railway Co. and Union Pacific Railroad mainlines connecting the Pacific Northwest to rail hubs in Chicago and Houston, and from Canada to Mexico.

"Whether we're talking about how the project reduces rail congestion on the mainline and expands our capacity to 400,000 rail cars per year, or how it supported thousands of family-wage jobs during design, engineering and construction — as well as jobs for the future — this has been a critical project with far-reaching benefits for our community, region and nation," said Port of Vancouver Chief Executive Officer Julianna Marler in a press release.