Kia to export Telluride SUVs at Port of Brunswick 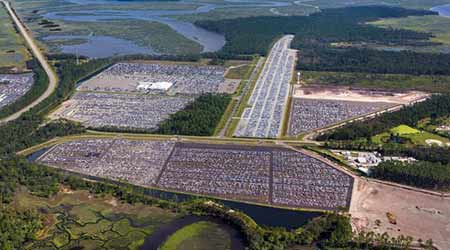 Parts for the Telluride, an eight-person SUV, are received at the Port of Savannah. Through "vertical integration" — parts in via Savannah, autos out via Brunswick — Kia is taking advantage of Georgia's extensive road and rail infrastructure, as well as its broader network of shipping line services, GPA officials said in a press release.

"The launch of the Kia Telluride, our largest and most refined SUV to date, will be a monumental achievement for KMMG," said Stuart Countess, the automaker's chief administrative officer and vice president. "From the support we receive from GPA with our inbound parts from our global supply chain to supporting our export of finished vehicles to current and future markets, GPA will play an important role."

Kia has been using the Port of Savannah since 2009, when KMMG began producing vehicles in West Point, Georgia, for the domestic U.S. market, said GPA Executive Griff Lynch.

"Their decision to export the Telluride via Brunswick highlights the benefits of having North America's largest container port and largest autoport within 85 miles of each other," said Lynch. "Georgia provides the total package when it comes to auto manufacturing and global distribution."