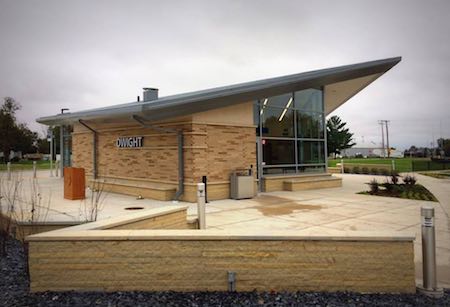 The Illinois Department of Transportation (IDOT) yesterday held a ceremony to mark the completion of a new passenger-rail station in Dwight, Ill., along the Chicago-St. Louis higher-speed Amtrak route.

The $3.26 million depot, which opened for service today, is the first new station to open to passengers on the route, IDOT officials said in a press release. In August 2015, construction began on the 1,500-square-foot structure, which features free Wi-Fi service and a temperature-controlled waiting room.

The work was funded through a federal grant administered by IDOT to introduce 110 mph passenger-rail service on the Union Pacific Railroad corridor between Chicago and St. Louis. New stations also are being built in Pontiac, Normal, Carlinville and Alton, Ill.

Existing stations in Lincoln and Springfield will be upgraded.

The higher-speed rail project is expected to be completed in 2017, according to IDOT.