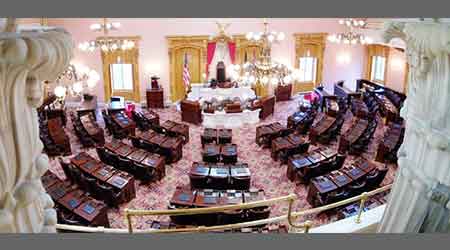 A railroad safety bill introduced earlier this month in Ohio's House of Representatives includes a provision that requires trains be operated by at least two crew members.

Those issues were of concern to the Brotherhood of Locomotive Engineers and Trainmen (BLET) and other operating craft unions, according to a union press release.

"This piece of legislation is critical for the safety of not only train and engine employees, but also the general public," said Tim Price, a BLET member and chairman of the Ohio State Legislative Board.

The bill was introduced by Ohio State Reps. Michael Sheehy, a Democrat, and Brett Hillyer, a Republican.

Meanwhile, Association of American Railroads (AAR) President and Chief Executive Officer Ian Jefferies explained in a newspaper op-ed piece published yesterday why he is opposed to federal bill that would require freight trains to be operated by two certified crew members.

Requiring railroads to operate freight trains with no less than two certified crew members on board "would limit the competitive viability of a privately funded transportation mode and undermine bipartisan infrastructure goals," Jefferies wrote in the Washington Examiner.

U.S. Rep. Don Young (R-Alaska) introduced the Safe Freight Act (H.R. 1748) in Congress earlier this year. The bill has been referred to the House Subcommittee on Railroads, Pipelines and Hazardous Materials.