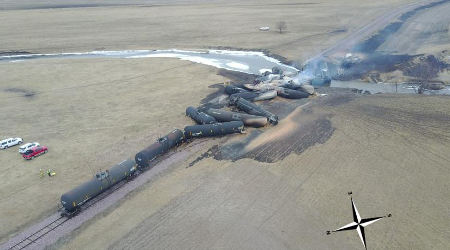 The incident caused 20 tank cars to derail, which then released 322,000 gallons of ethanol causing a fire, according to the NTSB report. No injuries or mandatory evacuations were reported.

The breached cars were not retrofitted to meet new U.S. Department of Transportation safety standards that go into effect May 1, 2023.

The train contained three locomotives, 98 loaded tank cars, and two buffer cars; tank cars in positions 21 through 40 derailed at a railroad bridge near Jack Creek, a tributary of the Des Moines River. About 400 feet of track and the railroad bridge were destroyed.

Event recorder data showed the train was traveling at 30 mph moments before the derailment. Shortly after the locomotives and 20 cars crossed the bridge, there was an emergency application of the air brakes without input from the crew.

The accident occurred on a Class 3 single main track, which allows a maximum speed of 40 mph for freight trains. Investigators recovered and reconstructed about 390 feet of the damaged rail and identified the manufacture dates and rail fracture characteristics. The UP had inspected the track the day before the accident and documented no rail defects.

Tank cars involved in the derailment were legacy DOT-111 tank cars. Investigators determined 11 of the derailed tank cars were breached from mechanical damage.

Information in the preliminary report will be supplemented or corrected as the investigation continues, NTSB officials said.