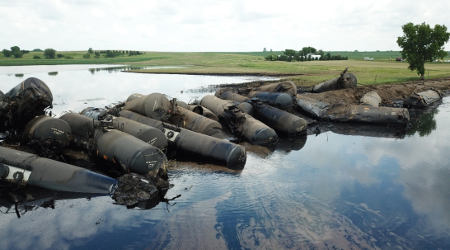 The National Transportation Safety Board (NTSB) has released a preliminary report of a BNSF Railway Co. train that derailed June 22 in Iowa, which resulted in a crude-oil spill.

The report details the initial facts in the investigation, which is ongoing.

Maximum speed on the territory was 48 mph, which is what the Federal Railroad Administration determined the train was traveling when the train encountered the emergency brake application. A total of 10 cars were breached, releasing about 230,000 gallons of crude oil.

No injuries were reported.

The shipment originated from the Hardesty Terminal at Rosyth, Alberta, Canada, and its destination was the ConocoPhillips Co. in Houston, Texas.

On July 10, NTSB investigators completed on-scene work in Doon, where tank car wreckage was staged after the accident. Investigators will examine parts removed from one tank car at NTSB laboratories in Washington D.C.