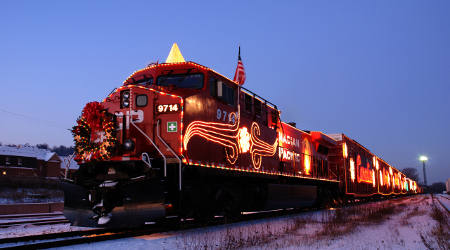 Canadian Pacific has released the Canadian and U.S. schedules for its 2018 Holiday Train.

Launched in 1999, the annual tour collects donations of dollars and food on its annual trip across Canada and the northern United States. Since its inception, the train has raised more than CA$14.5 million and gathered more than 4.3 million pounds of food for communities along CP routes in both countries, CP officials said in a press release.

"It is a privilege for CP to be able to run a program like this and connect with so many communities across our network. I want to personally thank each individual who has made a donation over the past 20 years – your collective efforts have made the Holiday Train a huge success for two decades," Creel said.

The U.S.-bound train will depart from Montreal on Nov. 25 and head south. Sam Roberts Band and JoJo Mason will entertain crowds at stops in Quebec, New York and Ontario. The Trews will then hop on board with Willy Porter in Chicago to complete the trip through Illinois, Iowa, Missouri, Wisconsin, Minnesota and North Dakota before arriving at the final destination in Weyburn, Saskatchewan, on Dec. 1.

The Canadian Train will depart Montreal on Nov. 27. Kelly Prescott will join three time Juno award-winner Terri Clark and Sierra Noble to spread holiday cheer through Ontario, Manitoba and Saskatchewan to Calgary, Alberta. Sam Roberts Band will then carry on through Alberta and British Columbia to the final show of the 2018 CP Holiday Train tour in Port Coquitlam on Dec. 18.