Since 2009, Progressive Railroading has recognized individual achievement in the rail industry in the form of the annual Railroad Innovator Award. The first 12 recipients, while offering unique perspectives and talents, share common traits.

They faced crises and guided their respective organizations through them. They fought good fights, as the late E. Hunter Harrison, the first Railroad Innovator Award winner, used to say. They recognized and embraced change. They took risks. They kept their eye on the short term without losing focus on the longer view. They led.

In June, Progressive Railroading and RailTrends® named CN President and CEO Jean-Jacques Ruest the 2021 recipient of the Railroad Innovator Award. He'll accept the award at the annual RailTrends conference, which will be held Nov. 18-19 in New York City.

"JJ represents the chain that took CN from a crown corporation to the private sector — and from precision scheduled railroading and Hunter Harrison to PSR 2.0 to the digital scheduled railroad (DSR)," said independent transportation analyst Tony Hatch, who serves as RailTrends' program consultant.

As a leader, Ruest also helped face — and face down — "trade wars and unstable border alliances, blockades, a national strike, polar weather extremes and volume opportunities out of places such as Prince Rupert," Hatch added.

In April, Ruest-led CN made a bold attempt to combine with Kansas City Southern a month after KCS had agreed to merge with Canadian Pacific. The attempt failed, prompting CN shareholder TCI Fund Management Ltd. to launch a proxy fight in September — and leaving Ruest and CN to explore their next steps.

On Oct. 19, CN announced Ruest would retire at January 2022's end following the battle with TCI over management and growth strategy differences.

In an interview with Progressive Railroading four days before CN announced Ruest would retire, he said CN needed to continue nurturing the PSR-to-DSR transformation, and to stay the growth course. The railroad also needed to continue taking the long view, and to keep thinking "supply chain" rather than "CN only" in the increasingly complex world of freight transportation.

Solutions have always been part of Ruest's life; early on, they were solutions of the chemical variety. He grew up in Drummondville, Quebec, a small industrial town east of Montreal. His father was a union employee who worked in a chemical plant.

Ruest worked in one, too — for two years after earning a bachelor's degree in applied chemistry from the University of Sherbrooke University. He later received an MBA in marketing from the University of Montreal. Ruest then served Imperial Chemicals Industries Inc. for 16 years in a variety of capacities, from sales and marketing to purchasing to business development. By the 1990s, he began to learn about the supply chain and its many links, including "all the good things and bad things" about railroads, he said.

"It was a turning point," Ruest said.

CN's 1995 initial public offering was another. At CA$2.25 billion, the sale was the largest IPO in Canadian history.

"I was very attracted to how bold and risky it was," Ruest said.

He also liked what he'd read and heard about Paul Tellier, CN's CEO at the time. He saw a strong leader with a clear vision who wanted a former (and lumbering) crown corporation to "move faster, change faster."

Ruest signed on with CN in May 1996 on the marketing side in the chemical department.

"People questioned whether [the privatization] would work out — from an outside perspective, my view was it was going to work out," Ruest said. "But it was even more painful than I thought it would be."

"CN was very Canadian. Inward focused," Ruest said. "So, the first acquisition Tellier did was probably the most important: the IC." 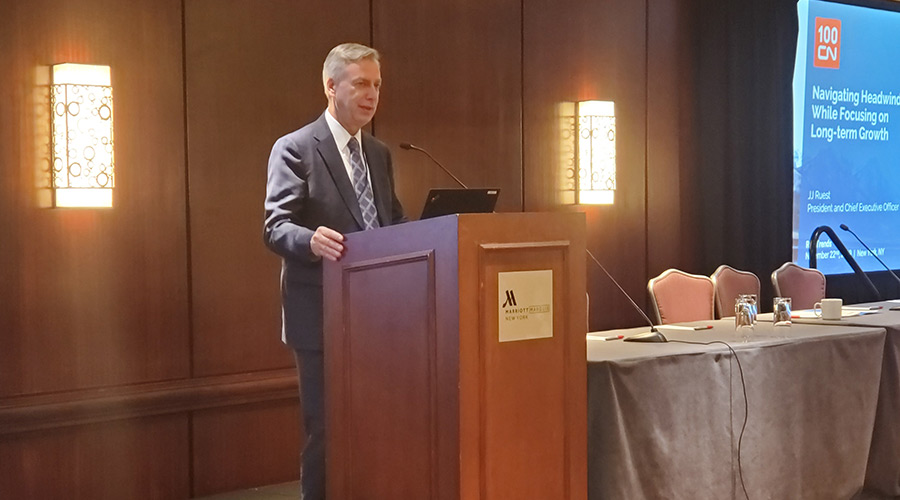 “The future is not going back to where we were in 2010 — it’s to build on it, to grow, to be part of the solution for everyone.” — Jean-Jacques Ruest

"They wanted to know if it was smoke and mirrors, if there was something to it," Harrison told Progressive Railroading in 2009. "I think they found it wasn't."

Harrison was on board as CN's chief operating officer before the Surface Transportation Board blessed the CN-IC union in March 1998.

"Hunter resigned from the IC, which was in a voting trust for one year, so he took a risk," Ruest said.

To be sure, Harrison brought disciplined thinking — and disciplined railroading — to CN. But he brought a lot more.

"Hunter taught us a lot about leadership, even more than operating practice," Ruest said. "He used to talk about internal fortitude: 'Leaders do the right thing.' 'Say what you mean, do what you say you'll do.' 'Do whatever it takes, especially if it's hard.' 'Fight the good fight — not just the ones with good odds.' That's what we have now with TCI."

Responding with speed and innovation

Ruest listened, learned, led, developed solutions, did the right things and rose through CN's ranks. He served the railroad as executive vice president and chief marketing officer from 2010 through early 2018, with responsibility for providing the strategic direction and leadership for CN's sales, marketing and supply chain solutions groups.

In March 2018, Ruest was named CN's interim CEO, replacing Luc Jobin. "In an increasingly competitive marketplace, CN must respond with speed and innovation to retain its leadership position," the Class I's board members said in a press release announcing the leadership change.

To Ruest, responding "with speed and innovation" in part meant focusing on the bigger picture. And the longer view extended beyond CN and the rail realm.

From PSR to DSR

Responding with speed and innovation also meant investing in technology, and guiding CN to the next PSR phase: DSR.

"When Hunter was here, technology was not a focus. Today, it's huge," Ruest said. "How do we bring technology into the operation to create safer, more efficient and more reliable service?"

For example, CN has been expanding its autonomous track inspection program (ATIP) in Canada and is phasing it in in the United States. The next-generation ATIP cars will incorporate laser technology and imagery.

"My vision is one day, we won't have people inspecting, we'll rely on technology," Ruest said. "People will spend 90% fixing and 10% inspecting and checking, just to be sure technology was right."

Ultimately, investing in technology can help the railroad improve its OR, CN officials believe.

"It requires capital, and a willingness to spend money on things that may work or may not work immediately — or ever," Ruest said. "Sometimes you need to be willing to take risks that could be a catalyst to lowering the OR in years to come. You can't always cut."

The same applies to the commercial side of the business. Since early 2020, CN has implemented application program interfaces (APIs) to enable customers and global supply-chain partners to obtain critical freight information and trace shipments online in real time.

The PSR-to-DSR model also will help CN bolster its sustainability goals that address topics such as customer service, the workplace, environment and CN-served communities.

"It's about creating even more value for all stakeholders, not just shareholders," Ruest said. "That's the evolution of scheduled railroading to PSR to DSR."

'You can't go back to the future'

Where the evolution leads next at CN, and how much of a role Ruest will have in nurturing it in his remaining months at the helm, is unclear. Last month, CN's board appointed a committee to conduct a global search for Ruest's successor. And TCI called on CN's board to meet with former CN and Union Pacific Railroad senior exec Jim Vena — TCI's CEO of choice — and appoint the firm's four preferred nominees.

Hatch "truly hopes" CN continues to be forward thinking and continues to experiment with its "feed the beast" growth strategy.

"The world has changed and is changing. You can't go back to the future," Hatch said. "That would be the unwinding of the post-Hunter legacy."

For his part, Ruest maintains that growth — organic and the acquisition variety — must be part of CN's plan going forward. Innovative partnerships with ports and additional investments in technology also could be on the docket.

"The body of JJ's work is growth oriented, and under his watch, CN became the technology leader," Hatch said. "We need to see how this plays out."

How it does could determine Ruest's legacy. Ruest himself isn't sure how his work will be viewed.

But over time, Ruest hopes he'll be viewed as the link in CN's evolutionary chain that took the railroad to the next level. That he fought good fights. That he demonstrated that investing in the future and controlling costs aren't mutually exclusive. That, by taking a longer view, a supply chain view, he helped make the railroad "more customer friendly," as he put it.

"If I'm able to do what we say we're doing, both of us will succeed: Customers will have access to bigger markets, and we will have more business, more opportunities," Ruest said. "Business comes because you help out your customers. That's ultimately what PSR should be."