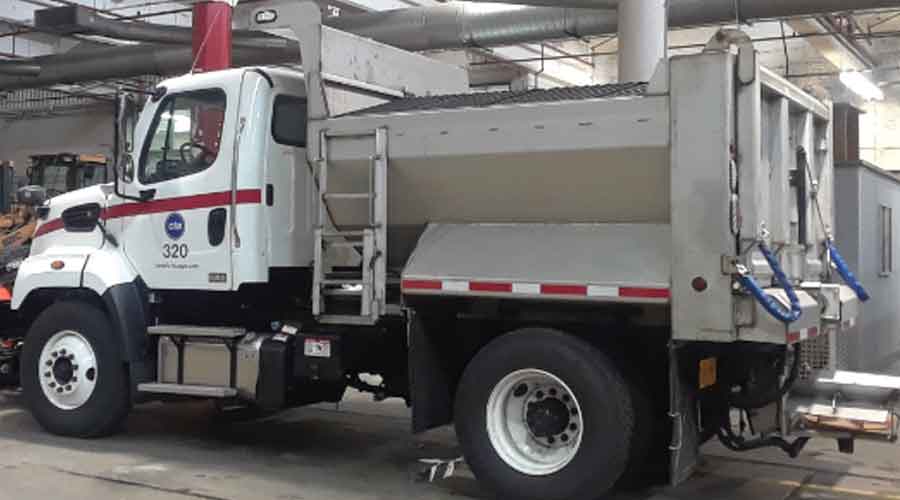 Every season presents its own challenges for freight railroads and transit agencies. But throughout much of the United States and Canada, winter can be the most brutal of them all.

Snow, ice and extreme cold temperatures can result in service interruptions and lost revenue. Fortunately, there is no shortage of suppliers providing everything from plows and air blowers to battery-charging units and rail-heating elements to help railroads battle the elements.

Meanwhile, railroads want flexible, all-season equipment that can pull double duty by, say, removing snow from the tracks during the winter and hauling rail or ballast during spring, summer and fall, equipment suppliers say.

Progressive Railroading reached out to a range of suppliers whose products are designed to help railroads make it through the winter (and, sometimes, the rest of the year, too). Emailed responses from 12 suppliers follow.

Flink Co. supplied the body for a combination dump truck/material spreader purchased by the Chicago Transit Authority. The MPB body is made of stainless steel and can be used year round.

It operates as a standard dump body, but doubles as a salt/sand and plow truck in winter. The rear spinner assembly can easily be removed for summertime use, company officials said.

The removable conveyor is 24 inches wide. When the conveyor is removed, an AR400 plate is put in its place to convert to a solid floor, enabling the hauling of gravel or sand. Additionally, the conveyor can be replaced with a belt-over-chain unit that disperses asphalt up to 400 degrees Fahrenheit out the rear opening. 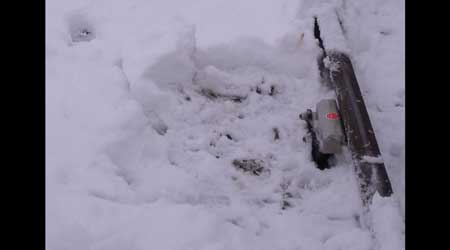 Frauscher Sensor Technology USA Inc.’s wheel sensors are IP68-rated, and feature a rugged and proven design the company said is “immune to the effects of harsh winter environments.” Materials used for the housing and potting compound resist the elements and provide durability, Frauscher officials added. Based on this construction, the outdoor components function with high reliability, even in extreme temperatures as low as -40 F, or when covered with water, ice or snow, company officials said.

Other common problems include the negative effects of collected debris such as leaves, rusty rails and road salt. Frauscher wheel sensors are unaffected by these factors: They operate on inductive, contactless principals and do not rely on the shunting of rail, company officials said.

Frauscher’s wheel sensors and axle counters are installed at grade crossings, in yards and in dark territory, and also are used in various transit applications.

Geismar North America has focused on snow removal for more than a decade. The company designed its Cab series cold-air blowers as quick-change snow fighting tools for the Geismar 360, which quickly clears a yard switch beside or on the track, company officials said.

With easy change-out grapples and brush-cutter attachments, the loader utilization can be maximized in winter, they said. In spring, the Geismar 360 becomes a sectional or gang workhorse for any railway maintainer using the company’s line of attachments and carts.

Among Geismar’s latest products is the Storm Hi-Rail Truck, now in its fifth year of production. With a gross vehicle weight rating of 69,000 pounds, the rail and material-handling log loader offers 20.5 feet of open deck length, racks for four rails, a 30-inch magnet and a combination rail/tie material grapple.

In winter, the Storm converts to a cold-air blower with a hydraulic creep drive that can blow snow from yard and mainline turnouts in minutes with a nozzle exit speed of more than 300 mph, company officials said. Customers also use it for clearing tracks, as well as for blowing snow off rail cars and other snow-covered surfaces, Geismar officials said. The company currently is developing new attachments to expand year-round utilization of the Storm. 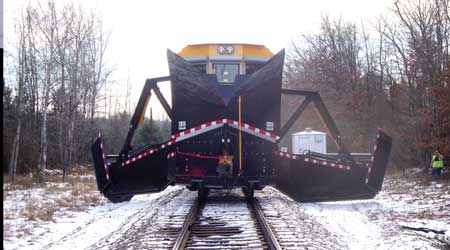 The Harsco Rail Spreader Ditcher is designed to plow heavy snow, spread ballast, reshape cuts in banks and cut trackside ditches. Weighing between 160,000 and 170,000 pounds, it is equipped with an operator control cab, a front plow, side wings, two non-powered bogies, AAR couplers and an auxiliary power unit for electrical/hydraulic power.

The unit’s heavy construction provides a low center of gravity, and the cab can seat up to five crew members. 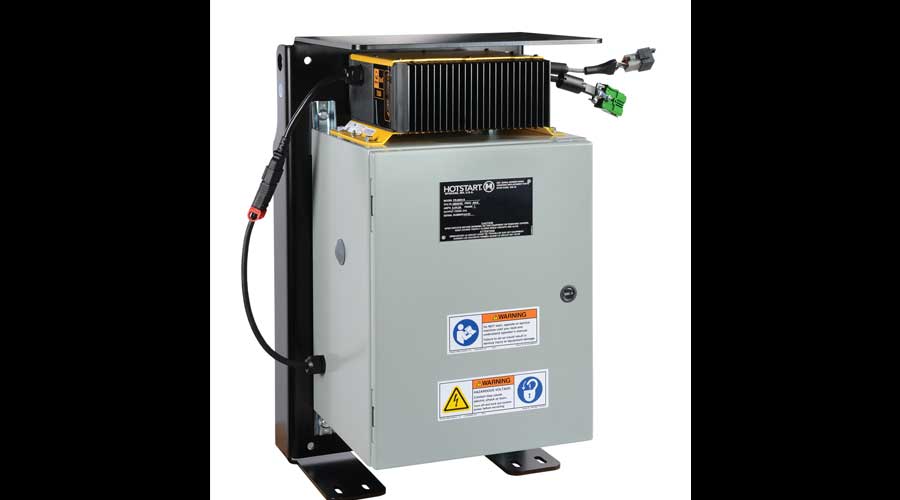 HOTSTART’s battery-charging unit (BCU) provides float charging to batteries, enabling them to maintain their available voltage. The BCU is designed for use in locomotives, heavy equipment, mobile applications and other battery installations. To take advantage of limited locomotive space, the BCU charger, transformer, circuit protection and all necessary components are packaged in a compact, foot-mounted configuration.

BCU models are configured to convert a variety of common on-site AC power sources to DC outputs suited for typical locomotive battery voltages. To meet increased demand, multiple units can be installed in parallel as a single-battery maintenance system, according to HOTSTART officials.

The BCU also can be installed onboard to operate in tandem with a HOTSTART idle-reduction electric heating system. During layovers, the locomotive will remain charged and ready to start immediately. The LED indicator displays charge status and system faults, and charging is automatically controlled and circuit-protected. No switches, timers or adjustments are required, company officials said. 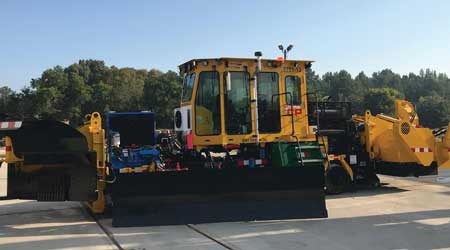 The cab’s window placement offers high operator visibility, and the tilt-cab feature provides access to major components. The front-mounted heater and air-conditioning provide a clean roof line with no maintenance components on the roof, company officials said, adding that the cab is tightly sealed to allow the high-performance pressurizer to meet silica dust requirements.

The four-season plow features a heavy structural frame that can be used for snow or ballast, according to the company, and the bolt-on curl kits allow for plowing through the deepest of snow. High capacity, 36-inch snow wings can clear snow 16 feet from the track center, while the two-stage blower discharges snow 30 feet to either side. For ballast work, the auger and blower assembly are replaced with the ballast deflector, and a reversing valve for the broom is standard on the KSF 940.

In 2019, Knox Kershaw introduced CAN-based controls as an option for snow fighters and ballast regulators. 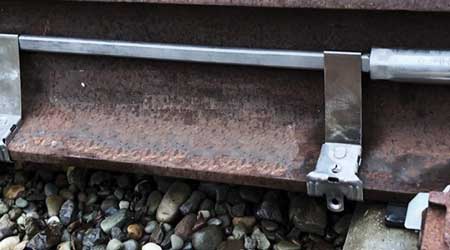 The company recently introduced an AAR-certified heater element to the nVent Flat MI Switch Heating System product line. It has a flat profile and is wider, yet shorter than other heaters, company officials said. The low profile helps the heater maintain contact with the rail for proper conductive heat transfer. The heater not only consumes less energy, it also runs cooler — minimizing the risk of track fires, company officials said. At a lower height, the heater element is an easier fit in tight spaces, such as in between the stock rail and wedge brace located at the entrance of the turnout. 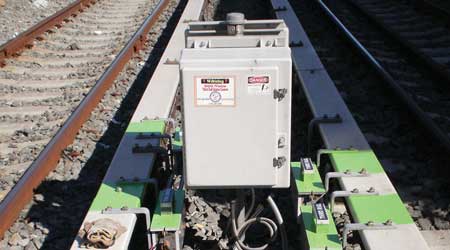 Heaters located along the electrified third rail and on wayside equipment prevent buildup of ice and snow during inclement weather. Traditionally, transit agency employees manually turn the rail heaters on during the fall and turn them off again in the spring. The automated system can be installed without disrupting service, and operators can monitor and control the individual heat traces from a central location. With a touch of a screen, they can turn the heaters on or off depending on weather conditions.

Kapsch’s DYNAC SCADA, along with Phoenix Contact’s control software, also enables operators to remotely perform routine system diagnostics collection to ensure the heaters can be controlled at any time, all from a single HMI interface at each server. The interface panels along the rail serve as the primary link between the

DYNAC SCADA master and a network of control point nodes throughout the network of Phoenix Contact 900 MHz radios. Each node controls, collects, and holds data for SCADA commands. 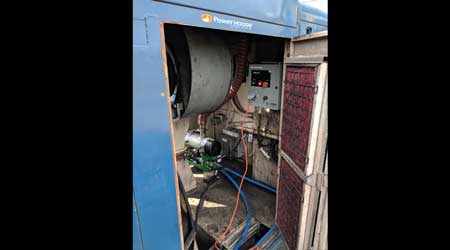 The PowerHouse™ from Power Drives Inc. heats and circulates locomotive coolant through the heat exchanger, maintaining a water temperature above 100 F — even in the coldest temperatures, company officials said. It “significantly decreases energy wasted through idling” and “delivers increased fuel savings and reduced noise and air pollution,” they added.

The PowerHouse is an EPA SmartWay-verified technology, compliant with EPA Tier 4 emission standards. It reduces emissions and fuel costs, consuming only 0.38 of fuel per hour, on average.

It is available in two operating models. The 120-volt model is used when locomotives have ready access to 120-volt shore power. It’s the only 120-volt plug-in offered in the rail industry, company officials said. The unit comes with oil-circulation and remote-monitoring capabilities.

The APU model is a modular two-piece unit that provides installation flexibility and is ideal for road-haul and run-through locomotives. The APU also includes standard remote monitoring for access to real-time operating data, and it charges the locomotive battery bank while the prime mover is shut down. Heat for the APU is provided by a diesel-fired heater, rather than electrical elements, which results in significantly less maintenance, company officials said. Like the 120-volt model, the APU model comes with oil-circulation capabilities. 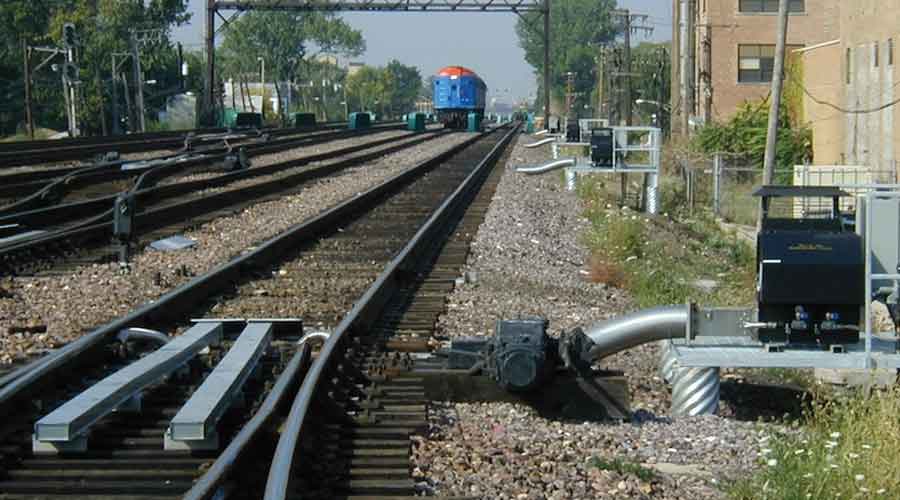 The five-horsepower Hot Air Blower (HAB) Switch Heater has been upgraded with a more powerful high-pressure blower that distributes high-velocity, high-volume hot air throughout the switch area via ducts and nozzles that keep the switch open and operable even in severe winter weather, company officials said.

With double the volume of hot air than previous blower models, the unit also is equipped with user-adjustable high/low BTU output to minimize fuel usage, as well as a variable timer-based high/low flame control that is adjustable to each application, they said.

The tubular Electric Switch Heater (ESH) is designed and built for efficiency, reliability and low-cost operation, regardless of whether switches and rails are covered in wet and heavy snow, light and fluffy flakes, or ice. Standard heaters for switches up to 45 feet long are rated from 100 to 500 watts per foot.

Both HAB and ESH systems can be combined with Rails’ wireless 900-MHz radio control system and a secure VPN router to provide wireless control and monitoring of the heaters. 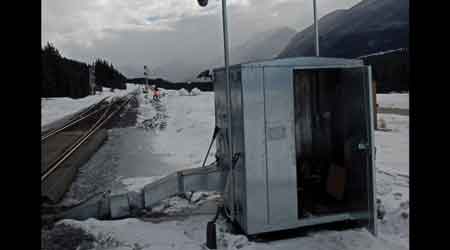 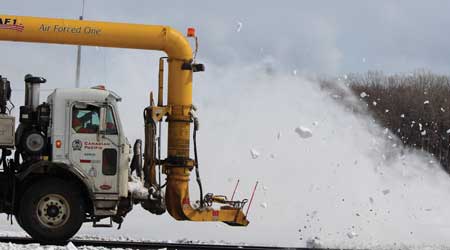 The AF1 EVO can provide a wind velocity of 535 mph and is used to blow switches and rails clean of ice, snow, sand and debris.
RPM Tech

RPM Tech’s AF1 EVO cold air blower can be used all year long, company officials said. The blower is powered by a 416-horsepower, Tier 4 diesel engine, and the air flow is provided by a triple-stage centrifugal fan system.

With a joystick, operations are controlled hydraulically for rotation, telescopic and lateral movement. The nozzle descends as low as three inches from the rail and as high as 39 inches. With a 33 percent further reach than similar units, the AF1 EVO provides more work flexibility and less time consumption, company officials said.

The unit can provide a wind velocity of 535 mph and is used to blow switches and rails clean of ice, snow, sand and debris. And after winter is over, the AF1 EVO module can be replaced by a platform/tool carrier.