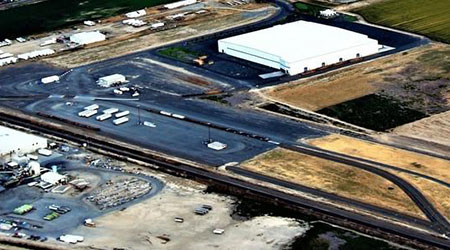 The Port of Quincy has begun the first phase of a project to expand its intermodal terminal located on BNSF Railway Co.'s mainline in Quincy, Washington, port officials announced earlier this week.

Phase I entails adding gravel surfacing of 90,000 square feet for container storage on the terminal's east and north sides to accommodate an increase in ocean container freight that moves by truck from the Port of Quincy to the ports of Seattle and Tacoma.

The work will include the installation of 8,000 tons of compacted, crushed heavy surfacing granular material, port officials said in a press release.

Port officials expect to request state and/or federal assistance to help fund the estimated $400,000 cost of the second phase.

The port's intermodal terminal currently provides storage and loading services for 40-foot export containers of frozen food products going by truck from central Washington to the ports of Seattle and Tacoma. The number of containers being stored and loaded has increased dramatically over the past three years, port officials said.

Additionally, the terminal has more than 8,000 feet of rail storage/siding tracks and can accommodate loading westbound short-haul intermodal trains with 20-foot or 40-foot containers of dry and/or perishable agricultural products.

Moreover, the port has a top pick container loader and small locomotive to  move and organize stacked containers within the terminal.